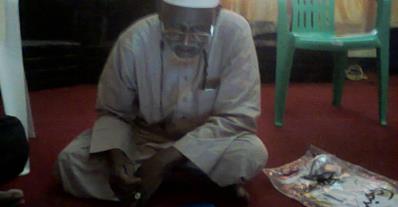 Mogadishu (HAN) March 31, 2014 – The government of Somalia says it has captured two senior Al-Shabab commanders, one of them a suspect in a bombing that killed more than 20 people.

Officials displayed the two men to reporters Monday in the town of Qoryoley, but withheld their names, pending what it called further investigations.

Deputy Security Minister Ibrahim Isak Yarow told VOA’s Somali Service that one of the men is suspected of involvement in the September 2009 suicide bombing of the African Union peacekeepers’ base in Mogadishu.

The attack killed 21 people, 17 of them African troops, including the force’s deputy commander Juvenal Niyonguruza of Burundi.

The other man captured is said to be a trainer of the Amniyat, an elite al-Shabab unit tasked with suicide missions, intelligence and assassinations.

Sources told VOA that the operation to capture the men was carried out by a special unit known as “Gaashan,” or Shield, that was trained with U.S. support.

A security official, speaking on condition of anonymity, says three members of the special unit were killed when their vehicle hit a roadside bomb while escorting the suspects to Mogadishu, about 120 kilometers from Qoryoley

Somali and African Union forces seized control of Qoryoley from al-Shabab last week after heavy fighting. The al-Qaida-linked militant group has retreated from several towns and villages in the last month in the face of an AU and government offensive.

Liban Ali Yarow, the Chief Military Tribunal has said the verdict came after having seen the witnesses and the plea of the defendant who was arrested after assassinating government military officer in Mogadishu.

Death penalty is common in Somalia and the country’s penal code legalizes to use death penalty for the charges relating to murdering.

—
Speaking Freely is an Geeska Afrika Online and Horn of Africa Newsline (HAN) feature that allows guest writers to have their say. if you are interested in contributing or sending News, Views and Comments. Please email at: han@geeskaafrika.com