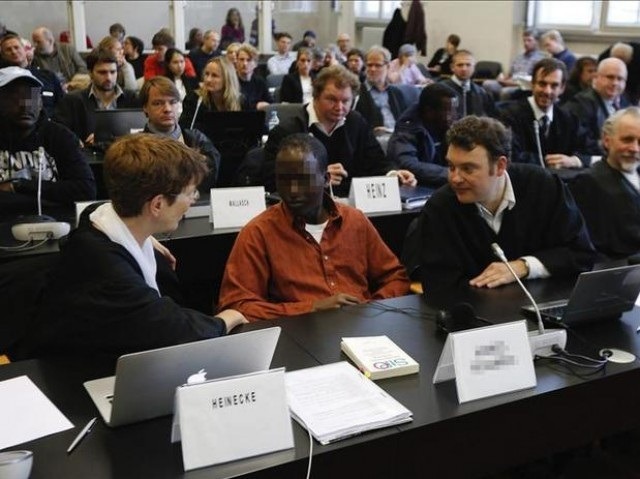 Mogadishu (HAN) April 3, 2014: The German Navy has released new video showing the 5 April 2010 hijacking of the German containership MV Taipan by pirates some 500 miles off the Somali coast.

In the video, which was filmed by a hovering naval helicopter from the Dutch frigate HNLMS Tromp, you can see a pirate skiff approach the vessel at high speed as the crew tried to ward off the attack using fire hoses and barbed wire. Later in the video, you can see pirates aboard two skiffs were able to board the vessel which at that point sat dead in the water.

As it turns out, the MV Taipan is the same ship seen in the below now-classic clip showing Dutch marines storming the ship and regaining control of the vessel after a brief gun fight with the pirates.

We know from reports back in 2010 that the crew was able to muster in a citadel and cut power to the ship, allowing the marines to storm the vessel and capture the pirates just hours after the initial hijacking.  All 15 crew members were found unharmed. No word on why the video is just now being released, after four years.

Ten suspected Somali pirates were extradited from the Netherlands in 2010 to face trial in Germany. The men did trial in Hamburg for the suspected hijacking of a German ship.  The Gulf of Aden, across Puntland and Central Somalia, off the coast of Somalia is a hot spot for piracy A Dutch court ordered four years ago 10 suspected Somali pirates to be extradited to Hamburg, to face charges of hijacking the container ship MV Taipan. Mike Schuler works as COO and Partner at gCaptain.