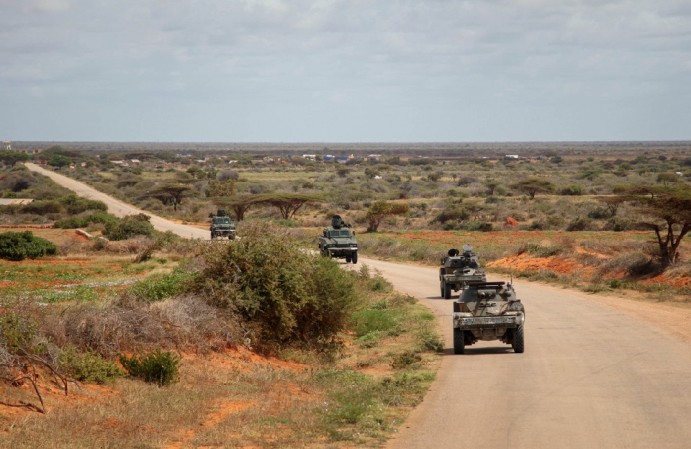 Kismayo (HAN) April 9, 2014 – Several African Union (AU) peacekeepers and civilians were killed and many others injured when a roadside bomb exploded outside an AU military base in the southern port town of Kismayo, the capital of Jubaland Authority, according to Juba administration official Abdinasir Seerar.

“We are not sure yet about how many were killed or wounded, but the explosion was a powerful one, and it was followed by several bullets fired by (AU) troops,” Abdinasir Seerar told reporters in Kismayo.

Meanwhile: A Car Blast kills regional official in Mogadishu. A regional Banadir official was killed in a car bomb. The explosive device thought to have been concealed in his car went off on Wednesday.

“The victim was preparing to go to his office at the time of the bomb explosion,” according to Wadajir governor Ahmed Hassan Adow.

Regional security reporter told HAN & Geeska Afrika Online, Mohamed Mahmoud Haji who was the secretary of Wadajir district administration died on the spot when an object assumed to be a mine assembled on his car exploded inside his personal car.

“I can confirm that our brother has passed away today after an explosive device thought to be a mine placed in his car went off” Wadajir district administration spokesman Abdi Samad Mohamed Abdirahman told a news conference in Mogadishu on Wednesday.

The regional Banafir spokesman said that no group has yet claimed for the responsibility for the brutal assassination which is the first such killing since the new military style Mayor has resumed in the Somali capital.

Al-Qaeda-linked Al Shabab militants in Somalia are known to have carried out such attacks before, but the group wasn’t yet available for comment on Wednesday’s assassination.