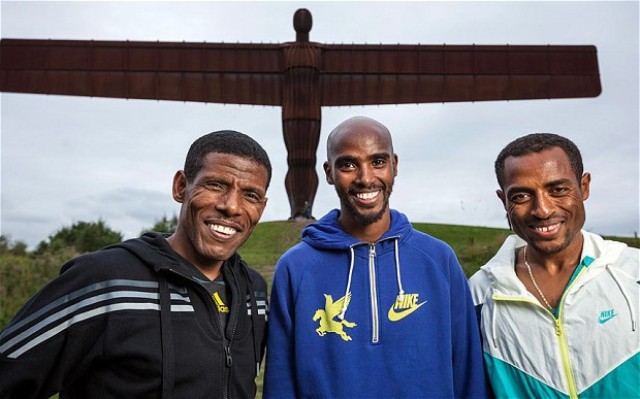 Addis Ababa (HAN) April 10, 2014 – By MATT MAJENDIE – Haile Gebrselassie has learnt not to write off Mo Farah. Long before Farah had blitzed to his double Olympic and world titles, Gebrselassie was adamant the Briton would never trouble the East African contingent on the track. Those words, said Farah, were the catalyst for getting serious about taking on and beating the best in the world.
The consensus among the elite men from Ethiopia, Kenya and Uganda is that Farah could win Sunday’s Virgin Money London Marathon though most, on what is his debut, see it as unlikely.

London Marathon 2014: Mo Farah’s last kick is key in ‘best marathon ever,’ says Haile Gebrselassie
HAILE GEBRSELASSIE believes he can help Mo Farah and his rivals to a world record when he sets the pace at the London Marathon.
Mo Farah is looking forward to taking the longest break from running since he started beating the world. Then, on his return from lazing on Sir Richard Branson’s Pacific Ocean paradise isle, Britain’s finest athlete is being urged by the great Haile Gebrselassie to dream of making outlandish Olympic history.

But Gebrselassie, arguably the greatest distance runner of all time – with nine marathon wins to his name, two Olympic gold medals and four World Championship titles – sees things differently. “His last kick is so amazing,” Gebrselassie said. “If they allow him to be with them for the last five kilometres, he can win easily. According to what I’ve heard about his preparations, the East Africans are facing a big challenge from Mo.

“Look at what happened last week with Kenenisa Bekele [another marathon debutant] winning in Paris. Athletes like Mo and Kenenisa, who come from the track, are used to this speed. For them, to run 2min 55sec per kilometre is just jogging.”

In the week before his 41st birthday, the Ethiopian could play an integral role in the race outcome as undeniably the most prestigious pacemaker of all time in what he believes is “the best marathon ever. I’ve never seen such big names in one race, men and women. It’s going to be very interesting on Sunday and I myself am just happy to be a part of the race, at least to start the race.”

Lining up alongside Farah and Gebrselassie will be world record-holder Wilson Kipsang and Olympic and world champion Stephen Kiprotich.

Gebrselassie’s task is to help lower the world-record time of 2hr 3min 23sec set by Kipsang in Berlin last year, the initial goal being to take the field past the 10km barrier with the clock at 28min 50sec. Such pace over the 26.2-mile course could prove Farah’s undoing. Gebrselassie is aware that in the latter stages Farah, as Gebrselassie was on his marathon debut over the same course, will be running well into his reserves.

Gebrselassie, who finished third on that occasion, said: “It is a physical test. I remember in 2002 when I ran here in London, I was good until 40km but the last two kilometres felt like another 30. Mentally I wanted to win but physically I couldn’t do it. In the marathon you can burn yourself out. Somewhere around 20 to 25km you can start to push and end up ‘kaput’. Mo at the beginning has to be patient and just wait. In my first marathon, my body was saying to me, ‘I have to go faster’. But the price was paid after 35km, the body starts to react. That’s the hard part – any marathon race always starts after 30km.”

While Gebrselassie is adamant that a first men’s home victory is on the cards since Eamonn Martin in 1993, others are not so convinced. The rising star of men’s marathon running, Tsegaye Mekonnen, the 18-year-old who won on his marathon debut in Dubai in January, said: “I don’t think Mo will win.”

The defending champion Tsegaye Kebede believes a Farah victory is plausible while the other standout marathon debutant, Ethiopia’s Ibrahim Jeilan, is hoping an aforementioned kick to the line materialises.

It was Jeilan’s late burst of speed that denied Farah the 2011 10,000m world title. Should such a situation arise on Sunday, Jeilan admitted: “It will be a dream.”