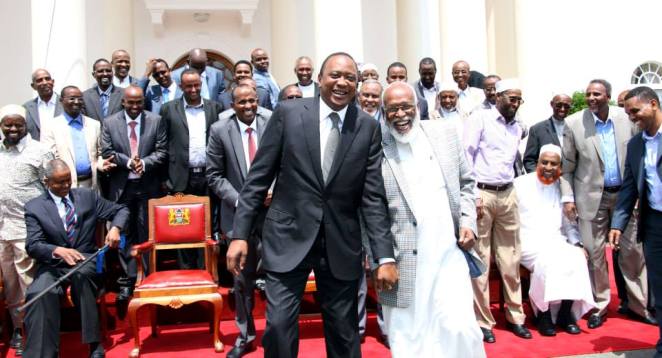 Nairobi (HAN) March 30, 2014 – According to the statement of the president of Kenya: This morning (March 29, 2014), Deputy President William Samoei Ruto and I together with Hon. Aden Duale, Senator Yusuf Haji and Hon. Yusuf Hassan met with members of the Eastleigh Business Community and other elected leaders to discuss insecurity in the country. The Government has entered into a pact with the Kenyan Somali community, that will see the community play an active role in combating terrorism threats to the country. Terrorism targeting innocent Kenyans must stop and we have therefore agreed that the top leadership of our security organs will start working with a task force involving businessmen, youth, women and religious leaders from the Kenyan Somali community, that will be instrumental in identifying those involved in criminal activities.

Opinion: Shabelle Media Network (Mogadishu, President Uhuru Kenyatta has hosted members of the Kenyan Somali community in talks, as the government seeks help to combat terror attacks in the country.

President Kenyatta believes the solution to combat terrorism does not lie solely with the government but must get the input of the public.

“We all have a responsibility to bring this to an end. Tourism has been greatly affected by these terror activities. The industry which contributes 10 percent to the GDP is virtually on its knees,” he said after a consultative meeting with members of the Eastleigh Business Community and elected leaders at State House.

The Deputy President William Ruto echoed his sentiments as he urged Kenyans to understand the need on how to live harmoniously irrespective of their religious, tribe, colour or political affiliation.

The Eastleigh Business Community Chairman Hassan Guleid confirmed that the Kenyan Somali community was ready to offer all the support it can to the Government in dealing with terror activities associated with the Al Qaeda linked Al Shabaab terrorists.

Guleid said that the war terrorists are engaging in has nothing to do with religion as Al Shabaab wants to portray it.

“These criminals are not Muslims. If they are fighting for Muslim rights why are they also bombing mosques, markets and killing innocent people in their own country Somalia?” he asked.

Kamukunji Member of Parliament, Yusuf Hassan who suffered serious injuries in a grenade attack said the Somali community had been seriously affected by terrorism and they are now ready to join hands with the Government in dealing with the evil activities.

“We are Kenyans hence anything happening in this country concerns us. We should not ask what is the Government doing about this issue, but rather we should ask what we are doing to support the Government in improving security,” said Guleid.

Garissa Senator Yusuf Haji reiterated their stand, saying the reputation of the Kenyan Somali community was at stake and it should take a more active role in combating the problem.

“To finish this terror group, we ourselves have to come out strongly and route them out. These are people who live amongst us and we must do all within our power to weed them out” he said.

Majority Leader Aden Duale affirmed that if the community collaborates in fighting terror, security agencies will have an easy task.

“We are the ones to finish and stop terror activities. We should identify which mosque incites the youth, which businessmen fund their activities and who harbours these evil people,” he declared.