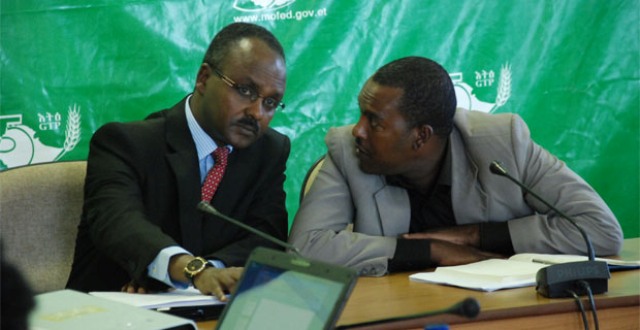 Addis Ababa (HAN) April 15, 2014 . With only one year to go before the expiry of the Growth & Transformation Plan (GTP), Members of Parliament expressed concerns about the failure to trigger economic structural transformation when the Plan’s implementation performance for the year 2012/13 was presented to them on Thursday, April 10, 2014. Discussion was dominated by problems related to export performance and limited resource allocation to the private sector.

The concerns raised during the 23rd regular meeting by members of the 547-seat Parliament, most notably by Girma Seifu, the lone opposition member in the legislative chamber representing Medrek, were almost identical to the concerns that were raised during the discussion on the report with international aid agencies and ‘development partners’ exactly a week earlier at the UNECA Conference Hall. This follows from the report by Abraham Tekeste (PhD), state minister for Finance & Economic Development,

While commenting on the 134-page-long report girma claimed that the government had forgotten about the high case scenario that envisions registering more than 14pc of annual growth and has settled for the basic growth rate of 11pc.

“But the government is having a hard time achieving even that,” Girma told MPs. 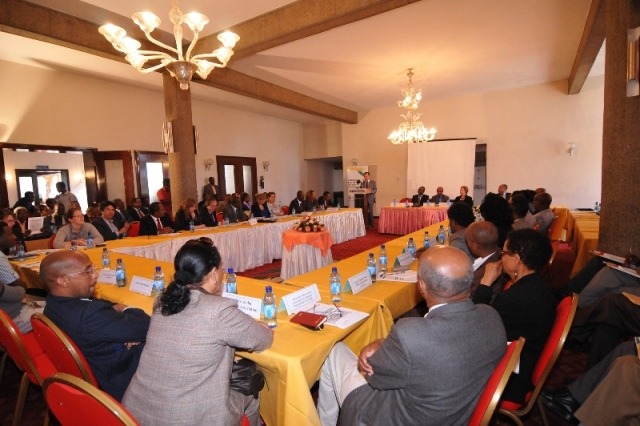 Girma also said electricity issues had become a major setback for the growth of the manufacturing industry, with reports showing an increase of only 177Mw over the last three years.

“The construction of the Great Ethiopian Renaissance Dam (GERD) should not blind us from seeing the reality on the ground,” the MP said in his critique of the report.

The amount of energy being sold to Djibouti and Sudan, according to Girma, has also overshadowed the small increase in energy generation.

The performance of the public housing sector also prompted Girma to express his concerns. The government had planned to construct 30,000 houses by the end of the 2012/13 fiscal year, but actually managed to lay the cornerstones of 33,000 houses. This, according to the report, is an achievement of 109pc. Girma, however, questioned these findings, saying that only 30pc of the construction had actually been completed.

“More than 800,000 people have registered and are saving to get houses but the government was only able to start the construction of around 35,000 homes in the last three years,” the lone opposition MP told Fortune.

Less than 50pc performance in major sectors like energy, sugar, export, housing and railway has made Girma sceptical of the double-digit growth that the government claims to have achieved in the last three years.

Girma was, however, vocal about the positive impact the plan has had on the economy, stating, “This does not mean that the economy has not benefitted from the GTP”.

While addressing the concerns, the state minister has admitted that while structural transformation has not completely met expectations, there has been some improvement in the industrial sector and better performance is expected in the coming two years.

“Achievements in infrastructural investments can show us that structural transformation may not be far away,” Abraham told the Parliament.

“Our focus is on transformation not just growth.”

The state minister defended his government’s achievement in providing suitable ground for the development of the private sector, stating that around 90pc of the economy is driven by the private sector. He also vowed that infrastructural investment would not be reduced, as it is a rewarding investment vital for poverty reduction and economic transformation.

Abraham also defended his government’s investment on sugar factories, saying the government is only trying to pave the way for private business to engage in the sector, as it successfully did in the cement sector some years back.

Ethiopia, says the report, has registered 10pc of real GDP growth rate, slightly less than the 11pc set by the government. The manufacturing industry stands out as registering growth that has not met the targets set.

The limited role of the manufacturing industry, according to Awoqe Atnafu, a representative of the Amhara National Democratic Movement (ANDM) from Womberima constituency of West Gojjam Zone in the Amhara Region, needs to be addressed.

The government intends to increase the role of the manufacturing industry and help it to register increased growth rates by improving transport, logistics, land and providing better services in such areas as customs, says Abraham.

Have you been affected by this story? You can share your views and experiences with us, Send your news and views to han@geeskaafrika.com

– HAN & Geeska Afrika Online (1985-2014), the oldest free independent Free Press in the region, brings together top journalists from across the Horn of Africa. Including Ethiopia, Somalia, Eritrea, Sudan, Djibouti, South Sudan, Uganda, Kenya, Oromo, Amhara, Somali, Afar and Harari. Plus, we have daily translations from 150 major news organizations in the Middle East and East African rregions. Contact at news@geeskaafrika.com