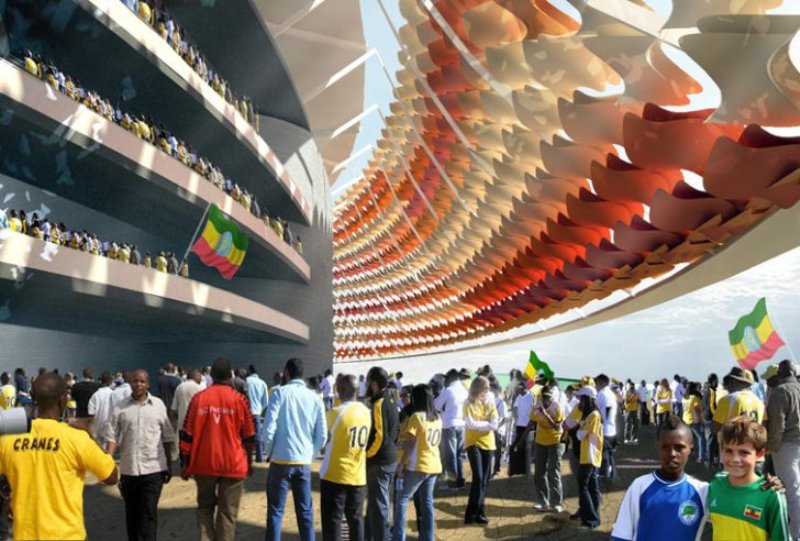 Nairobi (HAN) April 8, 2014 – Ethiopia’s to FIFA/Olympic-standard stadium is to be built by a Qatar and Australia consortium, the Doha-based Australian company Designsport said in a statement.The company, in partnership with local Ethiopian architects JDAW, won the bid based on its design for a sunken arena for a new national stadium and sports village in the Ethiopian capital, Addis Ababa.
According to TradeArabia news, the stadium evokes “Ethiopia’s world-famous excavated architecture and the ‘Mother womb’, the skeleton of one of the first humans, Lucy, who is about 3.2 million years old.”

The stadium will be designed and erected in the likeness of a coffee bean, highlighting the country’s main source of income.

“The façade material that wraps around the stadium was similarly inspired by Ethiopian culture, modeled on the Massob, an Ethiopian communal serving basket made from woven grass,” the companies’ said. Construction is scheduled to begin in 2014 and will be the largest sports structure in the country.

Samantha Cotterell, CEO of Designsport, a consultancy specializing in sport architecture and event design, who led the bid, said: “The brief was to design a center that would revitalize sport in Ethiopia. The result is a sports venue which can be used by all. It is for community use at a grass roots level right through to providing a high performance training center for elite athletes and a location for major international sporting events.”

Chris Bosse, who led the design team, and is a director of Lava, said: “We have gone back to the very origin of stadium design with the sunken arena surrounded by grandstands formed from excavated material.

“The man-made crater is a clever remodeling of the existing terrain, integrating facilities within the landscape. It is an efficient use of space which optimizes the site’s environmental performance while minimizing construction costs.”

Sources:addis news, HAN & Geeska Afrika Online Business Reporter
–
Have you been affected by this story? You can share your views and experiences with us, Send your pictures and comments to han@geeskaafrika.com
–
HAN & Geeska Afrika Online (1985-2014), the oldest free independent Free Press in the region, brings together top journalists from across the Horn of Africa. Including Ethiopia, Somalia, Eritrea, Sudan, Djibouti, South Sudan, Uganda, Kenya, Oromo, Amhara, Somali, Afar and Harari. Plus, we have daily translations from 150 major news organizations in the Middle East and East African regions. Contact at news@geeskaafrika.com