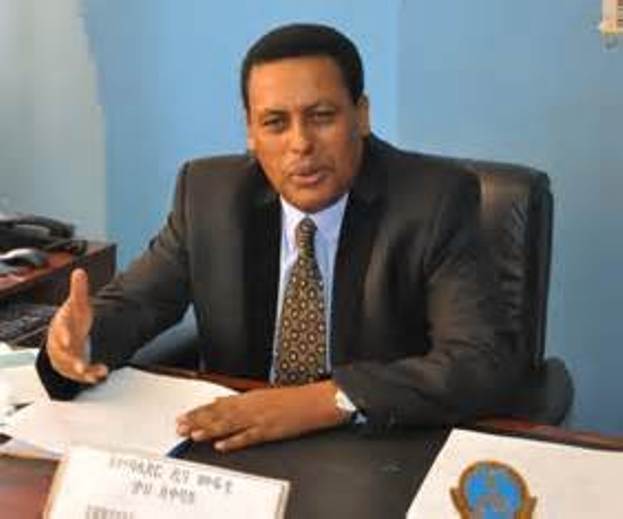 ADDIS ABABA (HAN) March 28, 2014 – The Ethiopian foreign ministry spokesman atto.Mufti  has lashed out at longstanding rival Eritrea, accusing the latter of destabilizing the East Africa region, while also blasting Egypt for the latter’s “malicious” media campaign against Ethiopia’s multibillion-dollar hydroelectric dam project. “Eritrea’s involvement in regional conflicts has been the case for long now,” Ambassador Dina Mufti told foreign journalists at a weekly press briefing on Thursday.
According to Mufti, Eritrea has played a role in the ongoing conflict in South Sudan. “We have circumstantial evidence of Eritrea’s involvement [in the South Sudan crisis],” the spokesman said.
Tensions between Addis Ababa and Asmara have persisted since a bloody two-year border war – in which tens of thousands were killed – ended in 2000. As for the row with Egypt over the Nile dam, Mufti said Cairo had launched a media campaign aimed at turning international opinion against the dam project. “The project is a regional project,” he said. “The project will not hurt the interest of Egypt. Rather, it benefits Egypt and other countries of the region.”
Egypt’s alleged media campaign, according to Mufti, “won’t be in the interest of Egypt and [in the interest of] the people of Egypt.” Egypt, he added, had walked out of a tripartite committee with Ethiopia and Sudan that had been formed to assess the dam’s potential impact. Subsequent efforts to bring Egypt back to the tripartite negotiations, said Mufti, had failed to bear fruit.
The mega-dam project has caused tensions with Egypt, which fears a possible reduction of its traditional share of Nile water. Addis Ababa, however, insists the project will benefit downstream states Sudan and Egypt, both of which will be invited to purchase electricity generated by the dam. Sources: Anadolu Agency
Meanwhile: Ethiopian Minster of Foreign Affairs Tedros Adhanom said on Thursday that his country is adamant about holding talks with Egypt about Ethiopia’s controversial Grand Renaissance Dam. In a meeting with a European Parliament delegation, Adhanom said that Ethiopia must find a solution on water allocation based on mutual benefit, Egypt’s state news agency MENA reported. Egypt insists that the hydroelectric dam, currently under construction on the Blue Nile in Ethiopia, may have negative consequences for Egypt’s share of the Nile waters. Ethiopia however has repeatedly claimed the dam will not harm Egypt. Recent talks between both countries fell through.