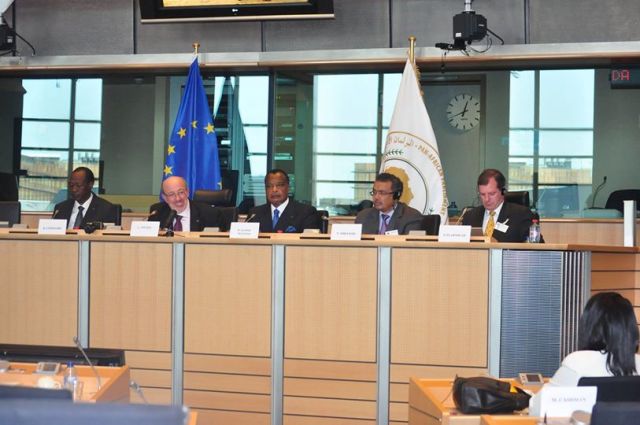 Djibouti (HAN) April 5, 2014: – On the margins of the EU-AU Summit, a sideline Debate on Security, Governance and Conservation which was organized by Louis Michel, former commissioner of the EU for Development and Humanitarian Aid was held on Monday (March 31, 2013) in Brussels. President Blaise Compaore of Burkina Faso, President Denis Sassou Nguesso of Congo, Foreign minister Dr. Tedros Adhanom and Louis Mitchel were the panelists who led the debate. Opening the session, Louis Michel highlighted Africa’s positive trajectory of development and the importance of giving due consideration to its views in the search for solution to contemporary security challenges. He stressed the impracticality of addressing with non-traditional challenges of security such as migration; technology related crimes and problems of conservation without the involvement of Africa which he said is an emerging force of the time. He noted that the African Union’s involvement in DRC, Mali is a Proof to the fact that African countries are grappling with their continent’s security challenges through their own policies. He further added that these efforts are also indicative that the principle of collective security is deepening under the stewardship of the African Union. He, however, noted that Africa still faces various challenges of security associated with conservation. He said over 19 billion dollar is circulating through piracy ,poaching and other drug and human trafficking criminal networks exemplifying the link between security ,governance and conservation of wild life.

Dr. Tedros Adhanom’s for his part underlined the link between the conservation of natural resources with security, environmental protection and economic growth. He said environmental works are vital not only to conservation of wild life, soil and water conservation but also to the development of economies. Reflecting on the nexus between conservation and security, he highlighted that the fact that finances coming from poaching are used for terrorism and other illegal criminal networks. Hence, he said the security dimension of wildlife protection should not be ignored. Citing the recent conference in London on Illegal Wildlife Trade, he emphasized the partnership between EU and Africa in wildlife protection should see the issue within the framework of contemporary security challenges. He commended the EU report on wildlife conservation which focuses on capacity building in illegal trade combat, prioritizing and categorizing species selected for protection among other things.

Denis Sassou Nguesso pointed out that terrorism, drug trafficking and piracy are the main security challenges to Africa which otherwise is undergoing rapid and dynamic development with one third of its population becoming a vibrant middle class. He emphasized in particular that the growing drug trafficking in Gulf of Guinea has shown that Latin America is giving way to Africa on so far as preferred route of trafficking is concerned .Nguesso underlined that the key concepts to tackle current security challenge are embodied in the Abuja Non-Aggression and Common Defence Pact. According to him, non-aggression and collective security forms the centerpiece of the Abuja Agreement. However he said addressing contemporary security challenges requires effective tacking of developmental issues in reducing poverty, ensuring rapid comic growth in tandem with respect for human rights and upholding of rule of law thereby affirming the nexus between development and security.

Blais compaore focused on building a win- win partnership between Africa and EU to tackle current security challenges which he said are by and large are trans -boundary in nature. Citing Burkina Faso’s involvement in resolution in crisis in Niger, Mali and other countries he called on EU to support proactive mediation efforts of Africa. Compaore also urged respect for the sanctity of borders conflict as per the 1964 OAU constitutive treaty as they are one major cause of conflict and the need to develop the culture of resorting to mediation to resolve border dispute. The debate discussed on transparency of extractive industries, management of natural resources in light of the EU-Africa partnership.