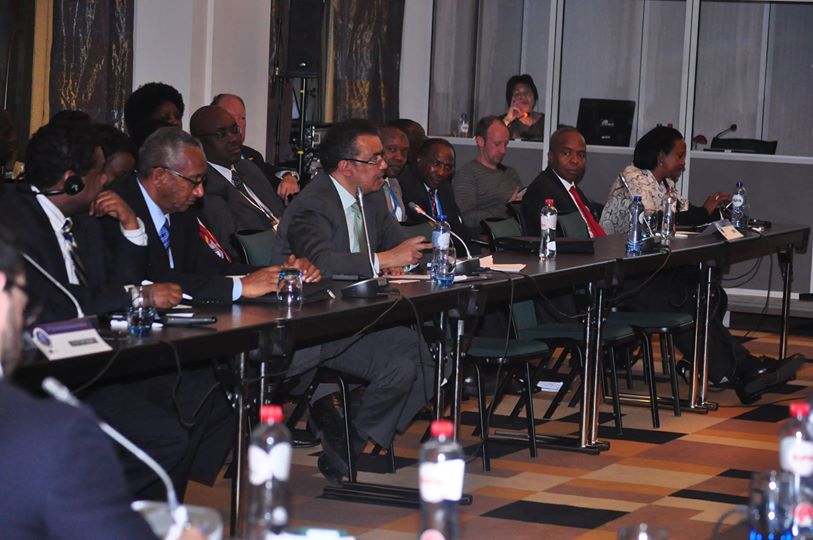 Addis Ababa (HAN) April 4, 2014:- Diplomats and staff at the Ethiopian Embassy in London today pledged their monthly salary to buy bonds amounting to £68,250 (around 2,120,000 Birr), in connection with the 3rd anniversary of the launching  of the Grand Ethiopian Renaissance Dam (GERD).

Following discussions on the progress made in the implementation of this huge national undertaking, employees of the embassy vowed to remain seized and unanimously decided to mobilize funds, joining hands
with the Ethiopian Diaspora residing in the UK.  H.E. Berhanu Kebede, Ethiopian Ambassador to the UK, in remarks made at the staff meeting, urged compatriots to intensify engagement in all development endeavours mapped out to make poverty history and realize growth and economic prosperity.

The River Nile, as H.E. Foreign Minister Dr. Tedros Adhanom recently said in an article, “is a symbol of cooperation and collaboration” and Ethiopia will uphold its principled stance to always work for a win-win
solution regarding the utilization of the waters of the Nile.

The diplomats and staff of the Ethiopian Embassy in London had previously raised £60,000 (1,920,000 Birr) in support of the national drive to undertake the construction of the Hidase Dam, which upon completion will
generate 6,000MW of power that will feed the fast growing Ethiopian economy.
Meanwhile: on Tuesday (4/2/2014). The Forum was attended by representatives of European businesses, financiers and representatives of the EU offices.

Dr. Tedros Explaining the dynamic growth taking place in Ethiopia, he said Ethiopia made it as the fifth fastest growing economy in 2011/12 with 8.4% GDP growth. In 2013, Ethiopia stood the fourth biggest economy among Sub-Saharan Africa with 118 billion dollar GDP calculated against Purchasing Power Parity. According to Dr. Tedros, Ethiopia is also among the top twenty five best performers in improvements in Human Development Index. Ethiopia’s average growth of GDP Per Capita Income increase was recorded as 11% from 1992-2010.

Dr. Tedros noted that global investors ranked Ethiopia sixth among the fifty-four African countries in market opportunities. In 2012 alone Ethiopia received FDI worth one billion. Dr. Tedros described manufacturing, infrastructure, agriculture/Agro-Industry, mining and oil and gas and hotel and tourism as major growth drivers. In manufacturing sector, Dr. Tedros invited global investors to take part in consumer goods, textile, and garment and leather industries. In agriculture he said, Ethiopia offers 3.8 million hectares of land for Agricultural investment. He also explained the opportunities in gas and oil exploration where several multinational are currently working on. In infrastructure, Dr. Tedros explained the massive works being undertaken in areas of telecom, energy and road and rail network. He said “Ethiopia is now working on the development of 8,000MW of power generation, 136,000 kilometers of road network and has embarked on a project of reaching 50 million target subscribes of mobile telephone users.”

In the question and answer session, representatives of businesses forwarded questions regarding Small and Medium Businesses, financial sector businesses in Ethiopia. Admasu Tadesse, president of the Preferential Trade Bank (PTA) shared Experience of the bank in financing projects in Ethiopia in manufacturing and banking sector. PTA has so far financed 150 million US dollar to project in Ethiopia. The president of PTA also explained bank’s plan to engage in reconstruction projects in Somalia. Dr. Tedros also explained the priority Ethiopia accorded to SME’s and that it encourages involvement of private investment in Ethiopia. The EU-Africa Business Forum deliberated on a number of issues related to regulatory framework, SME’s energy development and ways to further increase partnership between the two continents.
–
Speaking Freely is an Geeska Afrika Online and Horn of Africa Newsline (HAN) feature that allows guest writers to have their say. if you are interested in contributing or sending News, Views and Comments. Please email at: han@geeskaafrika.com