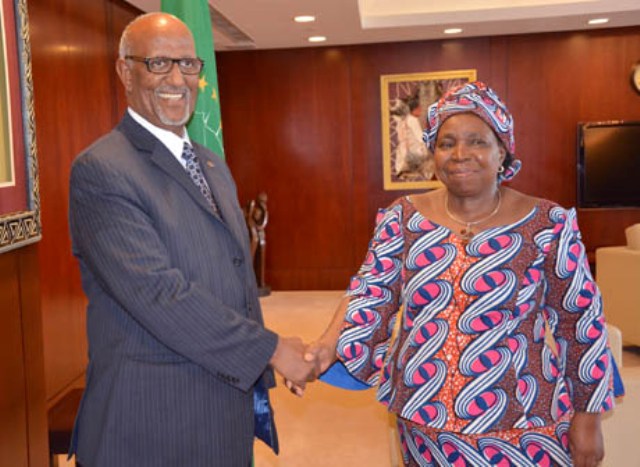 Three new AU member states’ Ambassadors to the Federal Democratic Republic of Ethiopia and Permanent Representatives to the African Union on Wednesday 9 April 2014, presented their letters credence to the Chairperson of the African Union Commission, H.E. Dr. Nkosazana Dlamini Zuma, at the AU Headquarters in Addis Ababa, Ethiopia.

She recognized the role that the AU plays on critical issues in Kenya, citing the case of the ICC, as well as having Kenya host very important institutions of the Union. She assured the Chairperson of the same level of commitment and participation that the Kenya has always had in the Union.

H.E. Ambassador Promise S. Msibi presented his letter as Permanent Representative of the Kingdom of Swaziland to the AU. Presenting his letter, he conveyed the King’s fullest support of the leadership of the Chairperson, and also re-echoed his earlier call and support for the Chairperson to push for alternative sources of funding.

H.E. Amb. Araya Desta from the State of Eritrea was the third Ambassador in line to present to the Chairperson his letter of credence as Permanent Representative to the AU.

He reported that Eritrea was doing well with its economy and making great strides in areas such as education in the Millennium Development Goals. He said though there were some challenges, progress is being made in his country.

H.E. Ambassador Araya then served as First Secretary and Consul at the Eritrean Consulate Ottawa, Canada from 1993 to 1994. From 1994 to 2001, he was Minister’s Counsellor of Eritrea’s embassy in Beijing, China, while simultaneously serving as a Permanent Representative to the United Nations for his country from 1997 to 2002. He then served as the Eritrean ambassador to the Nordic countries.

The Chairperson of the AU Commission, Dr. Dlamini Zuma congratulated each Permanent Representative on their appointment, expressing her availability to support them in their work during their time with the African Union.