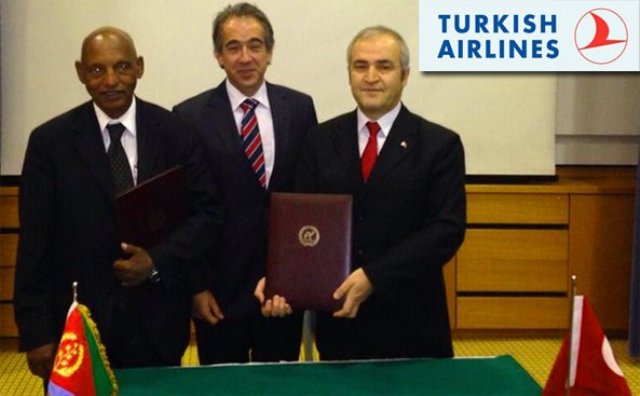 Djibouti (HAN) April 12, 2014 – With the number of destinations Turkish Airlines is flying to in East Africa having increased to double, the company is now making efforts to trade places with Lufthansa, Ethiopian Airlines and Air France for being the Horn of Africa’s top carrier. Turkey’s contacts, diplomatic and otherwise, with Africa have increased greatly over the past couple of years. With the opening of 23 new embassies in the last three years, including Mogadishu, Somalia, the number of Turkey’s embassies in Africa has reached 34.

In an interview with Voice of America’s Tigrinya program, Tsehaye Fassil, the Director of Eritrean Ministry of Foreign Affairs, confirmed Turkish Airlines will commence flights to Eritrea in May.

“Turkish Airlines will begin flights to Eritrea on May 29.” Said Tesehaye.

The Eritrean minister also disclosed Yemeni and Egyptian carriers will soon begin daily flights to Asmara to meet the demand of peak travel season to Eritrea, which is traditionally from May-August.

In regards to Lufthansa Airlines, the official said they can begin flights to Asmara whenever they want, and stressed that they are just one airliner of many that can do business with the country.

Finally, the success of Turkish Airlines in Africa is also due to the fact that it offers flights with relatively modest pricing. “We are flying to the same destinations as Lufthansa and Air France for half the fare,” the airline’s top official Topçu said a short while ago. THY attracts Africans not only with its reasonable prices, but with also its comfort, hospitality and new fleet. “The planes THY flies to destinations in Africa are mostly new one or two-year old planes,” Cebeci told Regional security reporter. Read more:  HAN & Geeska Afrika Online Updated news

Have you been affected by this story? You can share your views and experiences with us,  Send your news and views to han@geeskaafrika.com
–
HAN & Geeska Afrika Online (1985-2014), the oldest free independent Free Press in the region, brings together top journalists from across the Horn of Africa. Including Ethiopia, Somalia, Eritrea, Sudan, Djibouti, South Sudan, Uganda, Kenya, Oromo, Amhara, Somali, Afar and Harari. Plus, we have daily translations from 150 major news organizations in the Middle East and East African rregions. Contact at news@geeskaafrika.com