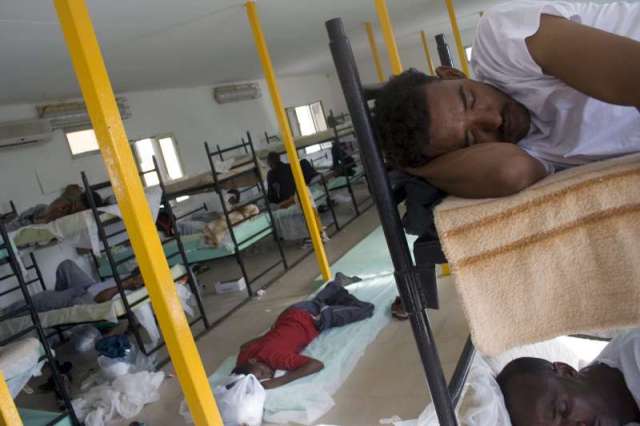 Again, Italy’s interior minister, reporting that about 4,000 had been rescued over the previous 48 hours, said on Wednesday that the crisis was getting worse. He said 15,000 migrants had arrived in Italy by sea so far this year.

The boats set off from Zwara in Libya and most of the asylum seekers were from Syria, Eritrea, Somalia, Nigeria, Gambia, Mali and Senegal, according to UNHCR.

“The Syria situation is getting worse and the neighboring countries are becoming overwhelmed so that is causing many Syrians to decide to travel to Europe to seek safety in search of protection in countries in Europe,” Fleming said.
This week, an estimated 6,000 people, many of them Syrians and Eritreans, have been rescued by Italy’s navy in four days and thousands more asylum seekers keen to reach Europe have gathered in Libya, the U.N. refugee agency on Friday.

UNHCR spokeswoman Melissa Fleming said the Italian navy had rescued the migrants from more than 40 overcrowded boats in the Mediterranean off the shores of Sicily and Calabria.

“Large numbers of women and children, including newborns and unaccompanied children, are amongst them,” she told a briefing.

There has been a 10-fold increase in arrivals of asylum seekers this year compared to the start of 2013, she said.

“We expect these numbers to continue to rise. There are thousands in Libya and more boats have been spotted.”
Syria has already created a refugee population of over 2.6 million in Syria’s neighbors and Egypt, but UNHCR estimates hundreds of thousands more have fled the country without registering as refugees.

Rome has repeatedly urged the European Union to take a greater role in policing the seas as two-thirds of migrants who reach Italy travel onwards to other countries in the region.

“Italy needs support from the EU in increasing its reception possibilities,” Fleming said.

Reporting by Stephanie Nebehay; Editing by HAN & Geeska Afrika Online Editor for update
–
Speaking Freely is an Geeska Afrika Online and Horn of Africa Newsline (HAN) feature that allows guest writers to have their say. if you are interested in contributing or sending News, Views and Comments. Please email at: han@geeskaafrika.com