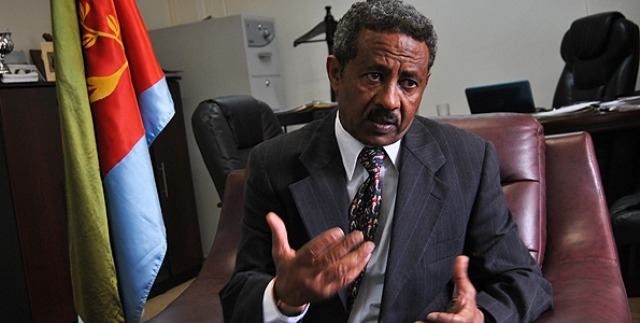 Khartoum (HAN) April 10, 2014 – Ethiopian Foreign Ministry spokesman Dina Mufti accused Eritrea of playing a role in the ongoing South Sudan conflict, but Eritrea has dismissed claims by longstanding rival Ethiopia that it was destabilizing the East Africa region by involving itself in the ongoing conflict in South Sudan.

Eritrean Ambassador to Kenya Beyene Russom was quoted by Eritrean state television as saying that the allegations were part of an Ethiopian smear campaign.
Eritrea, Russom insisted, wanted to see the South Sudanese people solve their domestic problems and again Asmara strongly denied those accusations from Addis Aababa.

“We have circumstantial evidence of Eritrea’s involvement [in the South Sudan crisis],” Mufti said.

Tensions between Addis Ababa and Asmara have persisted since a bloody two-year border war – in which tens of thousands were killed – ended in 2000.
South Sudan has been shaken by violence since last December, when President Salva Kiir accused his sacked vice-president, Riek Machar, of attempting to overthrow his regime.
The conflict has already claimed more than 10,000 lives, with the U.N. estimating that some 3.7 million people in South Sudan are now “severely food insecure” while around one million have been displaced by the violence.
–
Have you been affected by this story? You can share your views and experiences with us Send your news and views to han@geeskaafrika.com
HAN & Geeska Afrika Online (1985-2014), the oldest free independent Free Press in the region, brings together top journalists from across the Horn of Africa. Including Ethiopia, Somalia, Eritrea, Sudan, Djibouti, South Sudan, Uganda, Kenya, Oromo, Amhara, Somali, Afar and Harari. Plus, we have daily translations from 150 major news organizations in the Middle East and East African regions. Contact at news@geeskaafrika.com