Home Eritrea Eritrea: Invited at the level of the president to Africa-EU Security summit 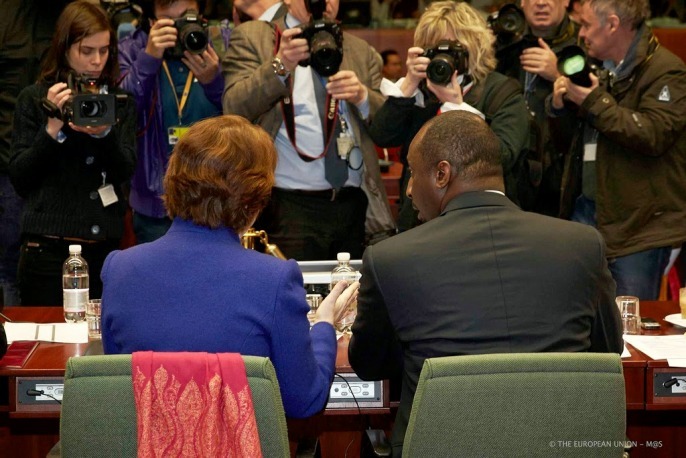 Djibouti (HAN) 29 March, 2014 -The African Union’s Peace and Security Council has advised the bloc not to attend the EU-Africa summit set for Brussels, Belgium next week to protest how Europe is holding the continent in contempt by determining who is eligible to attend the meeting. The PSC is the AU’s most powerful organ with the mandate to enforce union decisions.

According to Biniam Tekle, Dehai, Let me correct that misconception. Eritrea has been invited at the level of  the president and the president declined and we were told the vice
president is coming. We got confirmation that the Minister of Foreign  Affairs will attend the event. As for the case of Western Sahara, the European Union resolved that they  could not invite a country which is not recognised by the whole  international community. So there we have a problem, we cannot invite them  as fully-fledged partners.

Interview
The European Union-Africa Summit hangs in the balance. Africa is concerned  with the way Europe is cherry-picking African participants for the indaba,  among other issues. Our Political Editor Hebert Zharare (HZ) caught up with  EU Ambassador to Zimbabwe Mr Aldo Dell’Ariccia (DA) to discuss these  issues. The following are excerpts of the interview.

The European Union-Africa Summit hangs in the balance. Africa is concerned  with the way Europe is cherry-picking African participants for the indaba,
among other issues. Our Political Editor Hebert Zharare (HZ) caught up with  EU Ambassador to Zimbabwe Mr Aldo Dell’Ariccia (DA) to discuss these
issues. The following are excerpts of the interview.

HZ: How advanced are preparations for the EU-Africa Summit on the 2nd and
3rd of April?

DA: They are progressing very well. There have been meetings of the
steering committee on March 14 and another one at the beginning of this
week on the 24th and 25th of March. There will also be another meeting on
March 31 and on April 1.

It will now be up to the president, the chair of the African Union,
Mauritania, who was present as far as I know in the Council of Ministers to
transmit to the member states of the African Union and a decision will be
taken on what follows from that.
These recommendations came as a surprise to us. We will see how things will
follow.

HZ: Are these developments not going to affect the preparations of the
summit?

You can imagine that to mobilise 64 Heads of State and Government is
something which is complicated and if the proposal is to adjourn or to
postpone the meeting, then I am not sure if it will be easy to find another
date that will be suitable for everyone. Of course, this is something that
can be decided at the highest level.
The fact is that this Summit has been prepared for a long time, beginning
just after the end of the previous summit in Tripoli in Libya in 2010. This
is a complicated event to organise: you can imagine the protocol, the
security and the logistics.

HZ: Explain how you chose participants? On the list there are some
countries like Egypt where president Mohamed Morsi was deposed with the
assistance of the military and the AU has made its position clear on that.

DA: You have to consider that the EU-Africa Summit is the meeting between
the European Union and African continent. I want to be very clear on that,
it is not the AU-European Union meeting. Participation is not guided by the
membership of the African Union.
This event is the highest incidence of political dialogue between the
European Union and Africa and the intention of the European Union is to
make it possible to talk to all who are relevant to the subject of the
event, investing in people, prosperity and peace and be able to talk very
frankly with them and to have progress in these partnerships between the
European Union and this region.
That is why Egypt has been invited despite the fact that it has been
suspended from the African Union.

HZ: So can you explain why countries like Eritrea and Saharawi Arab
Democratic Republic have been left out?

DA: Let me correct that misconception. Eritrea has been invited at the
level of the president and the president declined and we were told the vice
president is coming. We got confirmation that the Minister of Foreign
Affairs will attend the event.
As for the case of Western Sahara, the European Union resolved that they
could not invite a country which is not recognised by the whole
international community. So there we have a problem, we cannot invite them
as fully-fledged partners.

HZ: Morocco was invited against the AU wishes, while Sudanese President
Omar al-Bashir was not invited, while his country was invited. Could you
please give the reasons?

DA: For Morocco, like I said before, the relationship here is between the
EU and the African continent and the participation is not guided by the
membership to the African Union. The presence of Morocco is extremely
important.
Just consider the common problems the two regions have, immigration,
transit, et cetera, means Morocco is an extremely important partner in this
dialogue.

It’s a country that withdrew from the African Union when the African Union
decided to accept Western Sahara, but considering the high level nature of
this working summit between the European Union and the continent, the EU
decided it was important to have Morocco on board.
On the issue of the Sudanese president Mr al-Bashir, we have a particular
situation which is there concerning an international arrest warrant which
has been issued by the International Criminal Court against him.

Because all the EU countries signed and ratified the Rome Statute, the ICC
has jurisdiction on all the EU countries and this binding jurisdiction
means the EU is bound by the decisions and actions of the ICC. This means
that if President al-Bashir had been invited, he would have been arrested
as soon as he set foot on any territory of the EU. This is not something
optional, we are bound by the Rome Statute.
So Sudan was invited because it is important to discuss the situation
there; their invitation was extended to the vice president.

HZ: African countries feel that the EU does not treat them as equals. What
is your take on this?

DA: In Tripoli we established a partnership of equals. The logic of
establishing this summit is to have a partnership of equals. I do not see
why one side should feel belittled. The idea is to go beyond what has been
the practice before, the idea of development aid, but to discuss the issues
of common concern and interest as equals. I do not think we are looking
down on Africa, I can assure you that it’s not an abusive position from the
EU point of view.

On the contrary, we want this summit to be a success. Because of this high
level of political dialogue, that is why President Mugabe has been invited
despite the travel bans, despite the fact that he is one of the last two
people left on the (EU sanctions) list.

HZ: There are some countries in Africa with serious human rights abuses but
the EU seems to have no problems with that and the bloc just invites them
for such summits. May you explain why?

DA: All countries are treated differently depending on the relationship the
EU has with those countries. The common denominator is our commitment to
social and economic development and full respect of democracy, human rights
and rule of law.
The fact that the type of present and political dialogue and the economic
co-operation that the EU has with those countries depends very much with
the specific situations in the country, but I will not call it
discriminatory.

African countries also have different levels of co-operation with the EU
countries depending with political interests.

HZ: What is the significance of these summits to Africa and the EU?

DA: This is the fourth EU-Africa Summit and on the occasion of the second
Summit in Lisbon (Portugal in 2007), which President Mugabe attended, the
Joint Africa Strategy was adopted and the strategy is a general framework
in which the relationship between Africa and the EU is laid down.

The move is to accelerate a partnership of equals based on political and
economic co-operation, trade and investment. If you take trade, for
example, there have been in these summits some discussions economic
partnership agreements.
In March 2012, President Mugabe signed the ratification of the Interim
Economic Partnership between the EU and Eastern, Southern Africa and Indian
Ocean region.

Thanks to that, Zimbabwe exports to the EU enter the markets of 28
countries with a total of about 80 million people, free of duty and this is
a great for trade.

Opinion: From the political point of view, I think the invitation that was extended
to President Mugabe to the attend the fourth summit and the exceptional
measures that were taken to make sure that he participates is a
demonstration the willingness of the EU to engage in dialogue with Zimbabwe.
To the EU, this is extremely important, I am sure is the same on the side
of Africa.   Sources: http://www.herald.co.zw/