Home Eritrea Eritrea: As I Wish: As She Wish 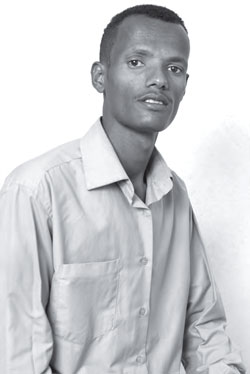 Djibouti(HAN) April 6, 2014 –  The Eritrean Book writer is call  Mr.Tesfit Abraha, and was born in Adi-Tsguar, Adi Quala sub-zone and raised there. He took his elementary school education in Adi Quala and high school in Asmara Comprehensive School. He graduated in Jornalism and has been engaged in media and art activities. He wrote a book of collection of poems.

Please tell us how you come to write your book: As I Wish: As She Wish’?

It is a collection of 46 poems. My friends in Sawa and here motivated and encouraged my to collect my poems and write them in a book form.

In the introduction of your book, you said “look to the beauty of the poems and don’t ask me which of your poems you like most”. Why is that?

I will repeat it again. People should enjoy the beauty of the poems rather than asking me which of my poems I like most.

Do your poems reflect your inner self or are you influenced by some one?

They reflect my identity. However, I might be also influenced by Dr. Russom, Isaias Tsegai and Robert Frost.

I follow romantic style. And they describe social life and love of country.

When did you identify yourself as a poem writer?

It was in 2002 while I was in Sawa taking my high school education that I thought I could be a writer. There a competition and I stood first. And that was the turning point in my life to become a writer. I had also the inclination of reciting poems when I was a kid.

Because I grew up among the society which has strong ties with traditional culture. They recite poems and songs while engaged in different activities like farming, doing communal works. The marriage ceremonies and the songs sang there are purely cultural. That had big influence on me.

How do you relate journalism with poem writing?

They are in the same discipline. In both fields you interact with people, you go to the people, and you try to understand the situation of the people and you write either for the media or you put them in the form of poems.

What is your future plan?

I am collecting more poems with my friends and in a short period of time we hope to produce another book.