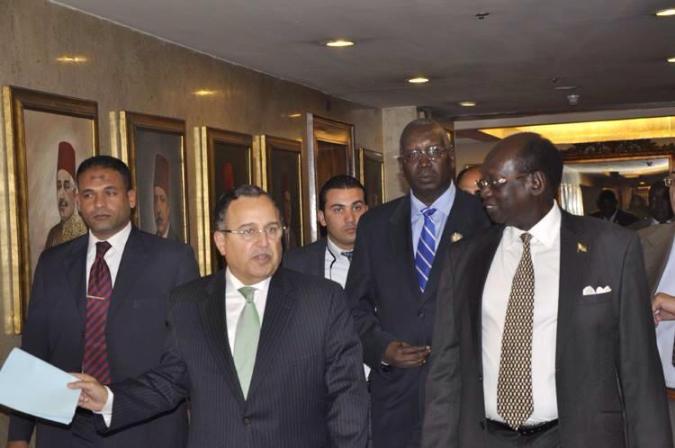 Djibouti (HAN) March 30, 2014 – The Republic of South Sudan is a key player in the region and we want to maintain a strong relationship with them, by investing in it and be part of its nation building process,” Egyptian Foreign Minister said. Therefore , It seems South Sudan is attempting to distance itself from Ethiopia of late. On Sunday, 22 March South Sudan signed a bilateral military cooperation with Egypt, following a visit to Cairo by a delegation led by defense minister Kuol Manyang Juuk. The signing comes a week after state-owned News Agency of South Sudan reported Egypt condemned rebel leader Riek Machar, and promised to send troops to South Sudan in support of the government.

But why is South Sudan risking its relationship with Ethiopia? This military agreement with Egypt is certainly going test their relationship, especially with Egyptian leaders threatening of military action against Ethiopia over the controversial Renaissance Dam. Perhaps Juba is suspicious Ethiopia is supporting Machar’s insurgency?
Despite Ethiopia’s public support for South Sudan, there are circumstantial evidence, and rumors that suggest Ethiopia is arming and funding Machar’s insurgency. Within this narrative, South Sudan’s military cooperation with Egypt could be interpenetrated as a tit for tat move against Ethiopia. If these allegations are true, then this wouldn’t be the first time Ethiopia supported insurgents while claiming they backed the government.

Ethiopia regularly arms, trains and funds Islamist and warlord militant groups in Somalia, all while professing they support the government in Mogadishu. By supporting each side, Ethiopia seeks to permanently keep Somalia in a state of crises so it can continue to milk the international community for military and financial aid. Ethiopia also seeks to use the conflict to deflect attention from its deteriorating human rights issues by presenting itself as a willing vassal for the West to conduct crises management in the region.
South Sudan’s suspicions of Ethiopia’s support for Machar is not without merit. Ethiopia is the only country that still maintains close ties with Neur rebel leaders, including Machar. In fact, Ethiopia arms, trains and supports Neur militant groups in the Gambela region against Anuak people. Moreover, when South Sudan requested military assistance from Uganda to battle the insurgents, only one African country was adamantly opposed to this: Ethiopia. The only rational explanation for Addis Ababa’s bizarre behavior is they were attempting to favor the odds for Machar’s insurgency to succeed.
But it seems as Ethiopia’s spoiler role in the region has finally caught up with it. South Sudan’s military cooperation with Egypt could potentially provide Cairo the legal framework to intervene in Ethiopia under the guise of defending South Sudan from Ethiopian destabilization. With Egyptian troops heading to South Sudan, the Renaissance Dam also becomes within Egypt’s combat radius, which is sure to sound alarm bells in Addis Ababa.
Cairo’s military cooperation with Juba also gives more credibility to a report on February that said Egypt was seeking military defense pact with Eritrea, Djibouti and Somalia.With these defense pacts, Egypt’s goal appears to be to isolate Ethiopia regionally, something the latter has been attempting to do with Eritrea since 1998, but to no avail.
At any rate, South Sudan’s military alliance with Egypt is a pragmatic move that serves both country’s national interests. For South Sudan, the military alliance gives the young country access to advanced military equipment, and trained troops that can decisively tip the battle in its favor. For Egypt, it gives the legal framework to defend its lifeline, the Nile, by using its defense agreement with South Sudan as a pretext for a possible future intervention against Ethiopia that will almost certainly mean the destruction of the Renaissance Dam.

Originally published on madote.com, on March 30th, 2014, titled: Is South Sudan Trying to Distance Itself From Ethiopia?