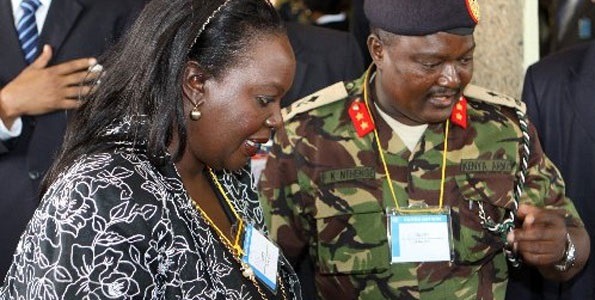 Therefore, Standard media of Kenya quated her and she said, Kenyan Government has no immediate plans of pulling out the Kenya Defence Forces from Somalia, Defence Cabinet Secretary Raychelle Omamo has announced. Omamo, who described 2014 as a decisive year in the fight against the Al-Shabaab, maintained that it is not yet time to discuss the exit of KDF from the war-torn nation. “We do not think that this is the time to discuss exiting Somalia. This is the time to step up military operations.

This is the time to crush the terrorist groups in Somalia that are causing insecurity in this country,” Omamo said. Speaking during a Cabinet briefing Wednesday, the Defence CS reminded Kenyans that the military crossed into Somalia in response to attacks by terror groups. “KDF ventured into Somalia in 2011 because of repeated incursions and repeated threats from terrorist groups in Somalia. We went into Somalia because we were aggressed first,” said the minister. See also: Satrin: When hope triumphed over murder, cruelty He cited the capture of Kismayu as a major achievement of KDF, terming it a game changer in the fight against the ragtag militia. She said through her ministry and support from other countries, they lobbied for the increase of African Mission in Somalia (Amisom) forces from 17,000 to more than 20,000.

Kenyan Standby force Omamo also announced that they are determined to establish an East Africa standby force with full deployment capacity by the end of this year (2014).

The minister recalled that KDF was instrumental in the evacuation of more than 3,500 Kenyans who were stranded South Sudan following ethnic conflicts that began last December. Omamo promised that the ministry will continue with modernization of KDF operations to maintain the force as one of the best in the African continent to stop threat from Somalia. Sources, Kenyan Standardmedia and HAN Regional Security Reporter.