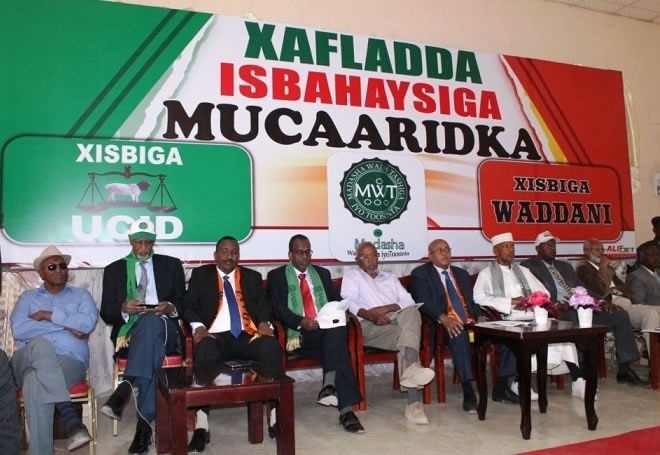 At a joint press conference in Hargeisa, both UCID and Wadani parties warned serious consequences should the Silanyo government go ahead with its ‘blind’ decision of delaying Somaliland elections next month.

Their Security warning echoes previous warnings by EU, UK and the US who cautioned against a political instability in the horn of African region often known as oasis of peace in a volatile Horn region, surrounded by Ethiopia and Djibouti.

“Our message to the public is: the government will be accountable for anything happens in the region as the result of its unilateral decision of postponing elections,” says Feisal Ali Warabe, UCID opposition party.

UCID opposition party leader accused the president Ahmed Silanyo of abusing his power by solely combining executive powers under his control, turning blind eyes and deaf ears to the dissents.

“Considering the government’s current political maneuver, we hereby declare that the government is not willing to hold election upon the date we agreed,” said Abdirahman Irro, the leader of WADANI party.

The Somaliland election campaigns which has been underway for the past few weeks seem to be dying away with candidates say the government is reluctant to hold elections in July.

No official comment could be reached from the Somaliland ruling party on this new development.

The Somaliland government has recently assured opposition parties that it would hold election in July after they boycotted president’s term extension endorsed by the parliament which drew wider criticism from the
international community.

The Somaliland opposition parties (both UCID & WADANI) then urged dissolution of the two upper houses as the result of the endorsement of the president’s term extension, accusing them of failing to perform their duties as planned. Source hol and HAN