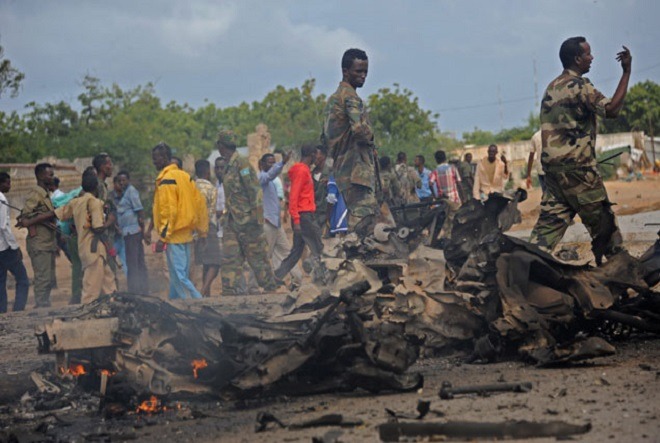 Mogadishu (HAN) June 24, 2015 – Public Diplomacy and Regional Safety and Security News – A terror cell on the brink of carrying out an attack was the target of a raid Monday that left Four Al-Shabaab militants dead, Somali National Intelligence source said. Another Al-Shabaab suicide car bomber and gunmen attacked a training centre for the national intelligence agency in Mogadishu.

Al-Shabaab militants launched a major suicide attack on Sunday against a military intelligence base in Mogadishu, “It shows we have to be extremely careful to protect and serve,” intelligence chief Abdirahman Mohamud Turyare said.

Al-Shabaab renamed ‘the group that massacres‘: The raid on a former farm in Afgoye was another sign that terrorism has taken root deep in Mogadishu’s heartland, just days after a terrorist rampage in Kenya left 11 militants dead — including two apparent foreigners. The Afgoye and Mogadishu raids was part of a wider anti-terror campaign launched by Somali National Intelligence agency.

A Somali National Intelligence tells Geeska Afrika Online by Phone that the ongoing terror threat appears to involve up to a dozen sleeper cells of between 20 to 80 militants ready to strike in Kenya, Ethiopia, Djibouti and the Somali capital Mogadishu. The source said that Kenyan and Djibouti intelligence agencies identified an “imminent threat” to Kenya, possibly also to the Ethiopian major infrastructure facility.

A Shift in strategy for Al-Shabaab? In recent weeks, Somalia and Kenyan security services received indications of an ominous possibility: that Al-Shabaab elements may have started directing Al-Shabaab extremists in Somalia, Ethiopia, Djibouti and Kenya to launch terrorist attacks back in their home countries, the Somali counterterrorism official told Geeska Afrika Online.

Social media and the tributes pour in for Somali security forces hero who thwarted Al-Shabaab attacks in Mogadishu today against UAE diplomats.

A Somali national army vehicle escorting a United Arab Emirates’ diplomatic convoy was hit by a car bomb in Mogadishu, killing at least 12 people, police say. The UAE ambassador survived the suicide attack as he was riding in a bullet-proof land cruiser vehicle. A Somali official condemn the suicide attack on a diplomatic convoy from the UAE and send Condolences for the casualties of martyrs of the Somali security forces, whom thwarted terror attacks.

Geeska Afrika Online affiliate HAN reported that the terrorism investigation in Mogadishu started weeks ago, and there has been a direct related connection established with the Kenyan military and civilian attacks, since the Al-Shabaab militants have vowed to intensify attacks during Ramadan (A Muslim fasting month).