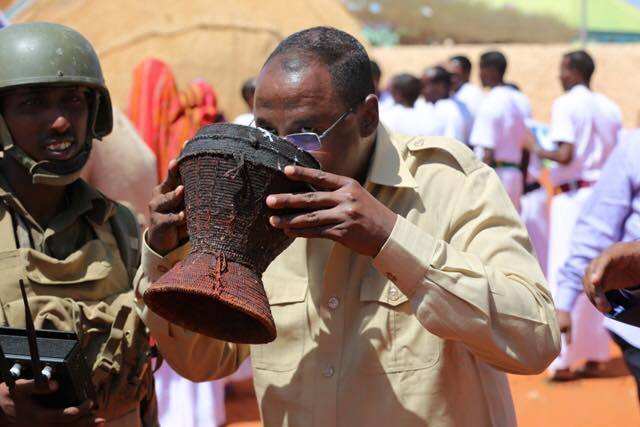 Mogadishu (HAN) May 7, 2015 – Public diplomacy and Regional Security and safety news. The former Interior minister and security, Abdikarim Hussein Guleed has declared presidentail candidate for central regions of Federal Somalia after a well organized ceremony has been held in Adado town of central Somalia’s Galgadud region.

“The key to power, then, is the ability to judge who is best able to further your interests in all situations. Keep friends for friendship, but work with the skilled and competent.”
Abdikarim Guuled, The 48 laws of Professional leadership for regional security and sustainable development to empower Central Regions Yearns for Peace and progress

The offical presidential ceremony was attended by politicians, elders, intellectuals, youth and female civil society organizations hailed Mr Hussein’s declaration of his candidacy, adding that he could deal with the needs of people in central Somalia regions.

Abdikarim Hussein Guled said that if he wins to be leader of central State of Somalia, he will focus on pushing terrorists out of the remaining pockets, fighting against piracy, implementing the reconciliation, improving education, forming competent authorities that would changes a lot from central regions’ condition.

Mohamed Hassan, one of the elders who attended the meeting, said that Hussein’s political program could change the situation in central Somalia regions.

Meanwhile, Somalia Member of Parliament, Cabdi Mohamed Abtidon described Mr Abdikarim Hussein as a citizen who could develop in Galgadud and Mudug regions in Somalia.

Mohamed Bashir, speaking on behalf of Somali culture has hailed a new candidate—Hussein to play a key role during the collapse of the Somali teaching babies.