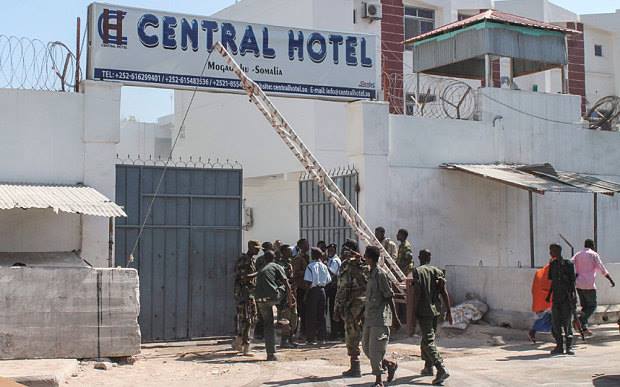 Mogadishu (HAN) February 22, 2015 – Public Diplomacy and Regional Security news.  The  suicide bombings at a Mogadishu hotel popular with ministers and officials were carried out by Dutch nationals, according to Somali National intelligence sources.

Somali intelligence believe both suicide bombers — a man and a woman — were Dutch-Somali citizens who infiltrated the Central Hotel close to the presidential palace ahead of the attack.

Sources within the Somali National Intelligence and Security Agency (NISA) said the man, identified as Ismail Muse, exploded a bomb in a car parked at the Central Hotel while the woman, Lula Ahmed Dahir, detonated her explosive vest inside the Hotel’s prayer room.
The woman “worked part time in Cental Hotel for up to four months,” according to an intelligence reports received by Intel sources.

“Her relationship to the male attacker… is not yet known but thought to be very close, if not husband,” said the report.

The attack left 25 people dead including two MPs, the deputy mayor of Mogadishu, the Prime Minister’s private secretary and the deputy PM’s chief of staff.

Thick clouds of black smoke were seen pouring from the hotel as the injured were rushed to hospital.
Shebab militants quickly claimed responsibility for the attack.

“Our fighters attacked the Central Hotel,”Al- Shabaab spokesman Abdulaziz Abu Musab saying that the aim had been to kill the apostate officials.”

Shebab rebels have staged a string of assaults in their fight to overthrow the country’s internationally-backed government. They have targeted hotels, the international airport, the presidential palace known as Villa Somalia, a UN compound and restaurants.
The last most deadly attack targeting government was in December 2009 when Shebab gunmen went room-to-room in the Shamo Hotel killing 25 people, including three ministers.
The African Union officials in Somali’s central region of Baladweyne received new Djiboutian troops to aid the fight against Al-Shabaab insurgents. Federal government forces and AMISOM troops have liberated key districts from Al-Shabab last year. “This is an effort to help Somali forces combat against Al-shabaab.

Though, it’s unclear if this will be enough,” senior Somali military commander told reporters at Baladweyne airport. Djibouti Foreign minister Mohamud Cali Yousf said that Djibouti government is planning to widen anti Al-Shabaab operations in the region. More than 1000 Djiboutian troops are serving under the AMISOM peacekeeping mandate in Somalia. The new troops will join the ongoing peacekeeping mission in Central Somalia to bolster current military offensives against Al-Shabaab. The militant group is seeking to topple the Western-backed Mogadishu government and impose its own strict version of Islamic law in the country.