Washington (HAN) December 5, 2014 –  Expert Analysis, Your Power & Regional Influence Magazine, opinion page by. Makhate Berhane. We’ve all seen this ridiculous statement littered in articles on Eritrean opposition websites and it’s even been used to describe the current situation in Eritrea by major international news organizations such as the BBC, Reuters, and The New York Times. Any reasonable person with knowledge of the happenings in Eritrea would admit that this phrase is exaggerated and doesn’t tell the complete tale of Eritrea. This phrase is also a favored one among the Eritrean Opposition parties. 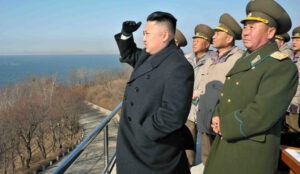 Being a second generation Eritrean-American, I’m the first to admit that Eritrea is nowhere near perfect and that there is room and a need for change. To say otherwise, would also be unreasonable. But, it’s phrases like “The North Korea of Africa” that make me, and many other Eritreans believe that there is a more sinister political agenda being pushed by the West, specifically the United States, that is bigger than the mask of gross human rights violations that they claim.

This is the same West that supported, with money and arms, the monarchy of Haile Selassie as he slaughtered thousands of Eritreans, Ethiopians and Somalis as he tried to consolidate his power over the region.

This is the same West that supported the brutal regime of Augusto Pinochet in Chile, Hosni Mubarak in Egypt and still supports one of the worst violators of human rights in the world, King Abdullah of Saudi Arabia. Now all of a sudden this same West decides that they can no longer tolerate the human rights abuses of a small country in the Horn of Africa? It just doesn’t add up.

Eritreans like myself, found further cause for suspicion and weariness of the “goodwill” of the West and Western NGOs in a recently leaked letter from the head finance expert of the Somalia and Eritrea Monitoring Group (SEMG). The finance expert, Dinesh Mahtani, wrote a letter to the Australian government, explicitly in his role as the finance expert of the SEMG, asking for them to grant the former Eritrean Minister of Information, Ali Abdu, full refugee status so that he could travel and “coordinate his activities”. The letter went on to also state that Mahtani believed that Ali Abdu “has great potential to play a stabilizing role in Eritrea, with the country possibly headed towards an uncertain period…Without moderate figureheads such as Mr. Abdu, a transitional process in Eritrea may fall prey to polarizing and possibly violent forces.” It’s clear that Mahtani was operating outside the parameters of the SEMG’s mandate, and that he is in favor of regime change in Eritrea and that the SEMG is doing more than just investigating and monitoring. The SEMG is polluting the Eritrean political arena with their own desires and wishes without considering the will of the Eritrean people, as has tragically happened time and time again to Eritrea throughout our short history. This is at the very least unprofessional, and at worst, illegal. It must be noted that Dinesh Mahtani did resign after this letter came to light.

As disenchanted as I am with the Eritrean government, I’m even more disenchanted with the Eritrean opposition. The opposition parties are divided, divisive, outdated, lack a clear vision for Eritrea’s way forward and seem to be motivated by vendetta more than they are by love for their countrymen and women. How out-of-touch these parties are with the Eritrean people is best exemplified in the location of their opposition meetings: Addis Ababa, Ethiopia. Some opposition groups even receive financial and logistical help from the current government in Addis Ababa. Many Eritreans, including myself, see these actions by the opposition as being shady and subversive as many Eritreans still have bitter feelings towards the government in Ethiopia over the bloody border war that was fought between 1998 and 2000. These feelings of bitterness between the two countries will take time to heal, but the healing can’t start until Ethiopia withdraws from almost a quarter of Eritrea’s territory that it occupies. It must be noted that Ethiopia explicitly agreed to follow the rulings of the UN founded Eritrea-Ethiopia Boundary Commission (EEBC) that ruled that this Ethiopian occupied land was historically and rightfully Eritrean territory. Another aspect of the Eritrean opposition that makes me questions their intentions, is their constant support of UN sponsored sanctions against Eritrea, when sanctions have proven time and time again to hurt the common civilians more than it does the government. The goals of sanctions are to pressure a government to act according to a set of demands. The pressure, no doubt, is meant to come from the citizens who are going to be hurt by the implemented sanctions. It’s a favored realpolitik tool of the West to force countries to bend over to their demands.

Another aspect of the Eritrean opposition that, in my opinion, hurts their legitimacy, is their arrogance in not considering the will and aspirations of Eritreans who live in Eritrea. Many of these opposition leaders are Western educated elitists who live cushy lives with their families in Europe or the US and are former ELF (Jebha) fighters who left the country in the 1980’s and haven’t lived in the country since. It amazes me that these leaders truly believe in their rewritten, flawless history of the ELF. Respect must be paid to the ELF for starting Eritrea’s struggle, but we can’t airbrush the historical facts that ultimately resulted in their downfall. Political change has to be organic and have the popular support of the people that will be affect, without this, it is illegitimate and is bound to fail.

A common sentiment I hear from many newly arrived immigrants from Eritrea, who get to the U.S. through The Sinai, through the dangerous water off the coast of Malta, and through other dangerous and illegal schemes, is that they are unhappy with the government in Eritrea, but don’t trust the opposition parties, so instead, they opt to remain neutral. Many, including myself, don’t think the opposition parties are capable or realistic about the on-the-ground situation in Eritrea. What I feel is the final nail in the coffin of the Eritrean opposition in the West, is their failure to garner popular support or traction among the hundreds of thousands of Eritreans living abroad. For all the years they’ve been operating, they’ve yet to turn the popular tide against the government. I don’t think that this is because many Eritreans are extremely happy with the PFDJ, I think it’s more of a reflection of their distrust and apathy toward the opposition parties and their ideology.

Again, I by no means wrote this paper in support of the government in Asmara. It’s a critique of the opposition parties who operate outside the borders of Eritrea.  madote