Addis Ababa (HAN) August 21, 2014. Diplomacy and diplomatic news. The Ministry of Culture and Tourism has said that Ethiopia’s Ambassadors play crucial role in promoting the country as a tourist destination and in building up the positive image of the country.

The Minister of Culture and Tourism, Amin Abdulqadir, told the meeting of Ambassadors and Consuls General that they were a vital factor in attracting tourists and publicizing Ethiopia’s tourist destinations and this was an indispensible element in the country’s growth and development.

The Minister said that under the Growth and Transformation Plan (2011-2015) it aimed to attract one million tourists to Ethiopia and earn as much as US$3billion. By the end of this last fiscal year it was well on the way to achieving the plan with 724,000 tourists visiting Ethiopia in 2013/14 and spending nearly US$2billion. Other speakers included archaeologists who presented some details of the new discoveries of early hominid remains which will soon be made public.

Ambassador Ayalew Gobeze, Ambassador to Turkey, and Ambassador Girma Birru, Ambassador to the US, emphasized that in addition to attracting investors, their offices were promoting the culture and history of Ethiopia. They also pointed out the need for the country’s infrastructure to continue to expand to allow for more tourists to get the best out of their visits and to boost the income from tourism. 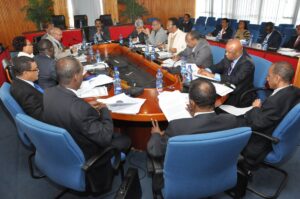