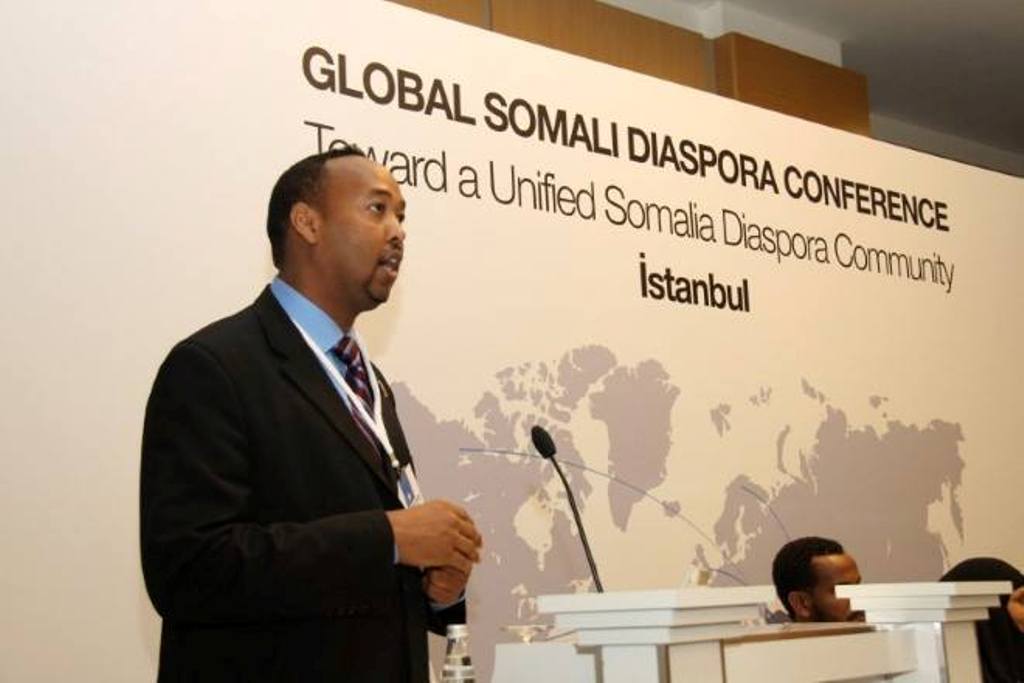 Istanbul (HAN) June 22, 2014 –  Updated news and Views About Global Somali Diaspora Conference in Istanbul. The Somali state is fragile and still not able to walk alone without international support and Diaspora involvement in all its forms.

comments made by Kenya and Uganda and to think of all the Somali Diaspora returnees working in Somali institutions so naive and out of touch with Somali culture and institutional needs is unfair and wrong.

The Somali Diaspora command enviable respect within Somali institutions as they have had the advantage of Western education, professional experience and are generally wealthier than the local population. 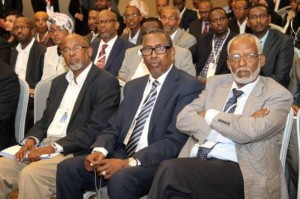 The Somali Global Diaspora Conference in Istanbul Turkey are in talks, negotiations and agreements to decide on the future make up, board of trustees, board of advisers and the executive leadership of the organisation. 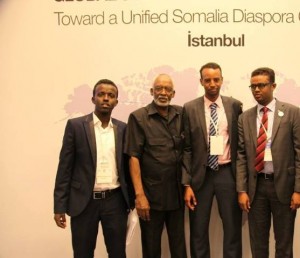 Abdifatah Hassan Yusuf (From left above) Reported that: Osman Jama Kaluun of Somaliland expressed his gratitude to the Somali Diaspora conference organisers and praised them for their efforts, ambition and professionalism. He spoke of the importance of the Diaspora and their contribution to their nation and the uniqueness of this Global Diaspora conference in Istanbul.
“It is the only conference or gathering of Somalis I have attended where people have been united by an idea. This is unique and refreshing,” said the former Somali Deputy Prime Minister Osman Jama Kaluun.

The Somali Global Diaspora meeting was attended by the Deputy Prime Minister of Turkey Professor Emrullah Isler who spoke of his deep admiration of the Somali people and once again reiterated the importance of the Diaspora as a tool for change in their home nation. The Deputy Prime Minister, like the Turkish ambassador to Somali before him yesterday, affirmed his government’s commitment to stabilizing Somalia and rebuilding the economic, social and institutional frameworks to make it into an effectively functioning state for the future. 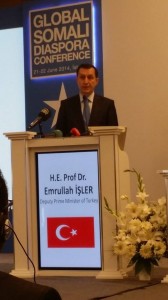 The Deputy Prime Minister of Turkey , Professor Emrullah Isler went on to speak about Turkey’s past and present ongoing assistance to Somalia and inform the Somali Diaspora that his country was going to stand by them and their home country while they are going through the difficult process of change.

“Our aim is that Somalis becomes a major actor in their own national destiny. We are helping to build their human capital throughout our educational institutions here in Turkey and we will continue to strengthen our ties and relationship with Somalia and its people,” said the Deputy Prime Minister. Professor Isler concluded by stating that Somalis are always welcome in Turkey and that they should treat it as their home too.

The International community have firmly placed the Diaspora at the core of their Somalia strategies and are actively promoting their engagement at every level and in all institutions.

Somalia with international support and the Diaspora returning to work and invest in large numbers it seems that an important corner towards the path of sustainable development has been turned. Today most government offices and departments are staffed by Diaspora members with often the right professional qualifications and in some not so many cases, experience. Many Director Generals of Government departments and Ministries, senior civil servants and Special Advisers are members of the Diaspora often returning home from the developed world especially western nations such as America, Canada, England and others from within the European Union.

The majority of these returnees are working hard to rebuild their home nation through the establishment of processes and protocols that will strengthen the capacity of the State to function and deliver for its long suffering people. Many Somali citizens are reassured, like some key donor nations that such an educated Diaspora can only succeed in this endeavor and along the

way take the local bureaucrats with them hence acting as the rising tide that lifts all the boats.

Somali Diaspora: It is an undeniable fact that the Somali Diaspora now working in infant Somali institutions such as the Foreign Ministry and Central bank are crucial to educating their local counterparts, spreading international best practices learned and practiced abroad in professional settings as well as enhancing donor and international investor confidence in the Somali government’s abilities. It is a credit to donor nations like Denmark, Great Britain and the USA to recognize this and directly encourage their Somali Diaspora to return to rebuild their homes and support the Somali state and people by directly paying the salaries of some of these key public sector professionals needed to make the transition from a failed to a stable state.

Somali Global diaspora Conference in Istanbul, sharing my fellow Somalis all of the success milestones of Somalis in the US particularly how the Somali Minnesotans are vibrant, business oriented, have now elected Somali officials and contribute tremendously to our Minneapolis State, of united States of America. Eng.Jibril Said today. 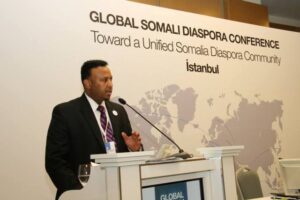 Eng. Jibril said, ”I  am honored to receive an award from H.E. Recep Tayyip Erdogan Prime Minister of Turkey on behalf of my colleagues from Minnesota delegation. Our goal and mission is to unite our people with one common purpose which is UNITED WE STAND DIVIDED WE FALL”

And Finally: The Global Somali Diaspora Conference in Istanbul elected Abdi Barud of the United Kingdom as the new Executive Director of the newly formed Diaspora organization Global Somali Diaspora born out of this two day conference. His deputy also chosen by the same committee of 9 Diaspora delegates from all over the world chosen themselves by their peers earlier in the day also elected Sadik Warfa of America as the Deputy Executive.
The results were reported back by the chairman of the selection committee Dr. Abdirashid Sheikh Yusuf a cardiologist from Turin Italy who explained that both candidates were chosen by locations as the UK and USA are where the majority of the Somali Diaspora reside today. He went on to praise both candidates for their contribution to Somalia, communities in the adopted homes and for the leadership they have shown throughout the conference. Abdi Barud’s election success came just after he returned from visiting the Prime Minister of Turkey H.E.  Erdogan with other selected Diaspora conference delegates this evening.
Abdi Barud, the new Executive Director, a qualified child protection Social worker in Bristol UK is a community organizer and activist who is the Secretary of Act For Somalia an influential Diaspora organization based in Bristol but working globally to promote peace, security and development in their home country through advocacy, dialogue and community development and engagement. 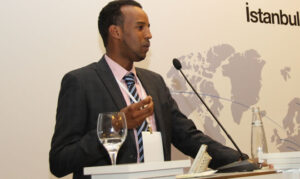