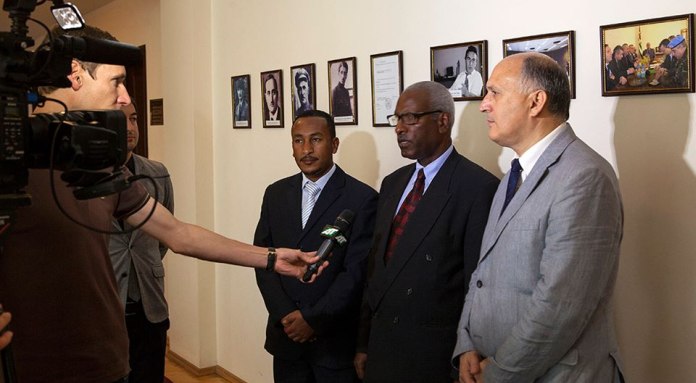 Cairo (HAN) June 13, 2014 . According to an Eritrean diplomat, ”When I first visited Abkhazia in 2001, I witnessed one of the strangest socially  I had ever seen. I had been to other Europeans marked by a civil war, to Chechnya and Afghanistan.” Despite the poor standard of life in Abkhazia he added, I did not meet a single Abkhazian people who considered conceivable what all European politicians were demanding: to rejoin Georgia, respecting the right of self-determinations.

The meeting was also attended by the Deputy Minister of Foreign Affairs Irakli Khintba and the Ambassador Extraordinary and Plenipotentiary of the Republic of Abkhazia in the Russian Federation Igor Akhba.

Viacheslav Chirikba noted the similarity of the fate of the people of Abkhazia and Eritrea in their struggle for national liberation. “We must preserve and strengthen everything that we have achieved at such cost to make our country economically prosperous, improve living standards. Political will of the leadership of the two countries and great potential in the field of economic and cultural cooperation is the guarantee of success of our relationship,”- he stressed.

According to Viacheslav Chirikba the Minister of Foreign Affairs of Eritrea is going to visit Abkhazia soon. “It happened that the Foreign Minister had to attend the inauguration ceremony of the President of Egypt and could not visit Abkhazia. But from myself and representative of the MFA of Eritrea I would like to confirm his intentions to come on an official visit to Abkhazia. I also want to convey, on behalf of the Minister of Foreign Affairs of Eritrea the invitation to the Abkhaz Foreign Minister to visit our country at any time” – said Teklay Asgedom.

“As you correctly noted, there is much in common in the history of our countries. Naturally, after 30 years of brutal war our people yearn for peace and security, as well as the people of Abkhazia, and our main task is to ensure this. We closely follow developments in Abkhazia and South Ossetia, especially after the tragic events of 2008. The fact that the war for Eritrean independence has claimed the lives of hundreds of thousands of people, does not allow us to remain indifferent to the desire of other nations to gain independence. The discussion process of recognition the independence of Abkhazia and South Ossetia has started long ago, and our current visit is caused by it,”- said the Ambassador Extraordinary and Plenipotentiary of Eritrea in the Russian Federation Teklay Asgedom.

“This is a familiarization visit and we have very good impressions about Abkhazia, we were able to understand many aspects of life in this state. Of course, our visit will help to reach a final political decision”, – he emphasized in an interview. At the meeting were also discussed a number of questions about the prospects for economic, educational, humanitarian and political engagement.