Home Latest News General Dahir Adan Elmi Has Been Reappointed as the Commander of the... 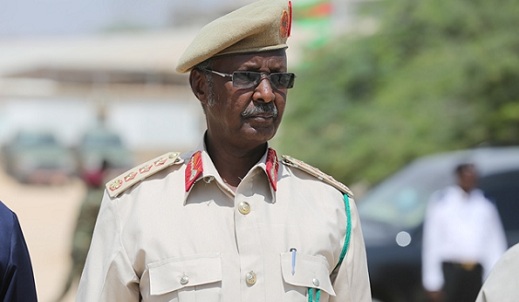 Mogadishu (HAN) AUGUST 16.2018. Public Diplomacy & Regional Security News. General Dahir Adan Elmi has been reappointed as the Commander of the Somali National Army by President Farmajo. President Farmajo has announced a reshuffle of the top security heads on Thursday changes made to the Villa Somalia.

Abdalla Mohamed Abdalla and Abdulkadir Mohamed Nur have both been sacked from their posts as deputy spy chiefs.

Fahad Yasin’s has been appointed to the Deputy of NISA from Director General of Villa Somalia.

On 13 March 2013, Elmi was appointed Chief of Army at a transfer ceremony in Mogadishu, where he replaced General Abdulkadir Sheikh Dini. Abdirisaq Khalif Hussein served as Elmi’s Deputy Army Chief.