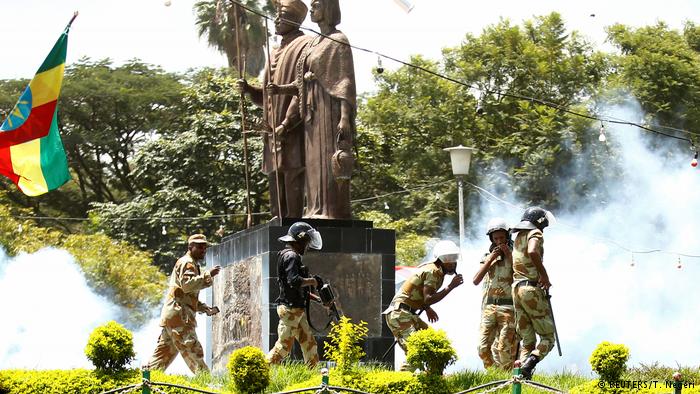 Share on Facebook
Tweet on Twitter
BY:Matthew Abbey. “Addis Ababa, Ethiopia – Walking down Bole Road, one of the main roads in Addis Ababa that cuts through the city, it’s easy to be reminded of the recently announced state of emergency. The military line either side of the street, men and women spaced no more than fifty metres apart wielding AK47s and batons in their distinctive blue outfit.
It’s been more than a year now since the protests began in Ethiopia’s Oromo region. After further protests engulfed the country in August, there was optimism in the air as the people found a collective voice to challenge the government’s dismal human rights record.
Today, however, the mood appears to have calmed. There is little doubt the state of emergency has played a role, announced by the government in October. Using the protests as a catalyst, the government has passed a series of laws that undermine human rights. Naomi Klein refers to similar scenarios as a ‘shock doctrine’, where governments use a crisis as a diversion to crack down on civil liberties. The question now is whether or not the momentum gained over the past six months can withstand the state of emergency.
Only a few months ago it was increasingly difficult to access parts of the country heavily effected by the protests, such as Gondor in the Amhara region. But today the buses are full, filling locals and tourists alike to the former capital. According to student, Mohamed*, “there is peace now. It has been peaceful for two or three months. The people and the government have reached an agreement.” If such agreement is in place and has brought peace, why does the government continue to restrict its citizen’s rights? Mohamed didn’t have an answer.
The state of emergency gave the government a host of further powers in the already restrictive state. To begin with, the government blocked access to mobile internet (only recently reopened), restricted online and print media, banned various forms of social media, limited diplomatic freedom of movement in the country to fourty kilometres outside Addis Ababa ‘for their safety’ (again, lifted now) and prohibited freedom of association through blocking public protests. Under international law, states have the right to exercise a state of emergency, so long as the measures are justified to the existing threat. The measures taken during the state of emergency appear to be designed to curtail human rights, rather than bring an end to the emergency itself.
After speaking with several people from across the country, the views seem mixed. Etefu* assured me that “everything is fine now, there are no problems”. This is the mindset that remains problematic for Ethiopia’s future. The government has used the protests as a prompt to further infringe on Ethiopians human rights. If this curtailment of rights becomes the norm, a shock doctrine will have been successfully implemented. The laws implemented in the state of emergency cannot continue if the country is to remain at least a tenant of democracy.
Not everyone in the country has been lead to believe that the crisis is over. It is well known that the government continues to ignore its people in pursuit of economic development. “The government is very rich … but they spend a lot of money on the army. They prioritise infrastructure and factories over the rights of the people”, said Elias.
It appears that now the protests are over much of the population is subdued, unwilling or unable to challenge the government’s role in breaching their basic human rights. It’s not surprising, given that over 11,000 people have been arbitrarily arrested, some never to be heard of since. Many Ethiopians, however, are in support of such arrests. George, an architecture student about to pursue postgraduate studies in the United States, believes “all of those are arrested are criminals.”
“We have a democracy here in Ethiopia… the government response was justified”, he continued. “Ethiopia needs a strong leader like Putin. There are many religions and ethnicites. The government needs to keep them in check”. Such views are not uncommon, but it also remains likely that the new restrictions have played a part in silencing opposition.
A crisis is the opportune moment for a government to curtail the rights of its citizens, but staying silent in such times only risks further entrenchment of authoritarianism and the continuation of human rights abuses. The protests over the last year have been the largest in Ethiopia since 2005, and giving up now will only give the green light for the government to make its crackdown the norm.
*All names have been changed to protect interviewee’s identity.”
Matthew Abbey an Australian freelance journalist currently reporting from the Horn of Africa.