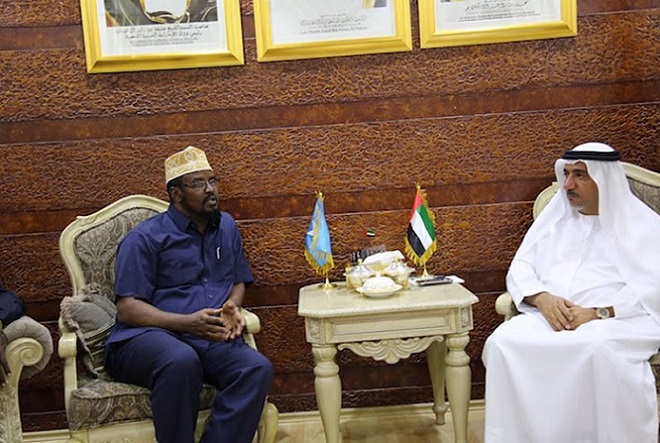 In this week, Somali regional leaders were invited to a gathering in Abu Dhabi organized by foreign interest-groups to influence upcoming elections by crowning individuals with a history of colluding with foreign entities at the expense of the state. As key meddlers in Somalia with dubious interest, Kenya and the United Arab Emirates (UAE) are committed to ensure the outcome of this election turns favorable to their candidates.

Each party is driven by a particular motive, but the overall goal is to rob Somalia from its maritime space and resources. According to insiders, one of the options is crowning the unpopular Prime Minister, Mr. Omar Abdirashid Sharmarke, into the presidency, with the support of some regional leaders, to be used as a rubber stamp for key decisions with respect to Somalia’s maritime and natural resources.

But how will that scenario be possible, one may ask? First, the foreign interest groups are prepared to shift the power towards unscrupulous politicians, who acted on dereliction of duties in previous instances. Secondly, financial offers will be made as incentives, as evidenced in past cases, to drop and retract Somalia case at the International Court of Justice (ICJ). This will be the ultimate goal intended to achieve by foreign meddlers through aspiring politicians.

In this context, Kenya is among the active meddlers in Somalia throughout the past decade, asserting its influence both militarily and politically. Besides its geopolitical interest in the region, Kenya has a lot at stake, particularly in the disputed maritime border with Somalia. Thus, the September hearing at the ICJ between the two has proven this inevitable truth, where observers noted the merits as well as the compelling argument presented by Somalia team. Also, Kenya claims that the dispute should be resolved under the 2009 controversial Memorandum of Understanding (MoU) which was rejected by the Somali Parliament and people.  The ill-fated MoU was funded by Kenya and foreign interests and signed by former Minister Mr. Abdirahman Abdishakkur with instructions from Prime Minister Sharmarke during 2009.

Regrettably, using the unlawful MoU as a cover, Kenya has given licenses to Total, ENI, and Anadarko Petroleum to conduct explorations in the contested area, which constitutes a clear violation of the international law of the sea as well as the laws of Somalia.

Ironically, both Abdishakur and Sharmarke are now running for president in Somalia with the support of Kenya, UAE and the same foreign oil companies – previously licensed by Kenya – who are actively seeking to realize a Somalia led by their cronies. The candidacy of these infamous former officials and the direct interference of Kenya, UAE and oil companies in Somalia’s presidential election process poses serious challenges to the sovereignty and natural resources of Somalia.

Clearly, if the court proceeds to adjudicate the case, both Kenya and its allies will have to lose considerable economic fortunes, consisting investments by ENI, an Italian multinational oil and gas company, which is heavily involved in concessions in the disputed zone granted by Kenya. However, ENI will not be the only victim in this case, others will lose significant capitals as well.

In addition, the UAE is in this to determine the upcoming election by persuading cash-strapped heads of Federal Member States in Somalia (FMS). By meeting their resource needs, these heads of FMS will do UAE’s bidding in Somalia to remain relevant at any cost for Somalia. It also has a significant oil interest in the region, which is very much aligned with Kenya’s interest.

On the other hand, Turkey is another factor in this equation, often with suspicious eyes by UAE because of its major development interventions in Somalia. UAE’s rivalry with Turkey goes beyond Somalia’s political arena, but it is more serious here because of the positive perception and high favorability that Turkey enjoys over UAE in Somalia.

Moreover, the actors convened in Dubai have shown their divergent interests, based on clan and political affiliations with several competing presidential candidates. One thing is for sure: unity on a particular purpose but that might not mean support for a candidate such as Mr. Sharmarke with his tainted track record of failures.

As we have seen it before, foreign money intended to lubricate the system is not without limitations. The recipients may have needs to use for it, but it might not change deeply-held views or aspirations in a society built on allegiance to the clan. Equally, consensus is hard to achieve among the stakeholders in question that are convened in Dubai because of competing foreign interests that command different followers in Somalia.

It is imperative that all Somalis including Somali parliament members, civil society, academicians, business community and all other segments of the society wake up to this renewed danger to rob Somalia from its natural resources and sovereignty using short-sighted politicians to hijack Somalia political process to legitimize the permanent annexation of Somalia’s maritime territory.

In closing, and given our weak position in the region, such blatant breach of Somalia’s sovereignty and territorial integrity will continue unabated unless we all stand and defend Somalia together. We can’t trust rogue political leaders on key national decisions, which demands a unified front as we enter a highly-charged political season in Somalia. Unlike other periods in history, this will serve as a litmus test for all of us to defend what is ours against any predators, both foreign and domestic.