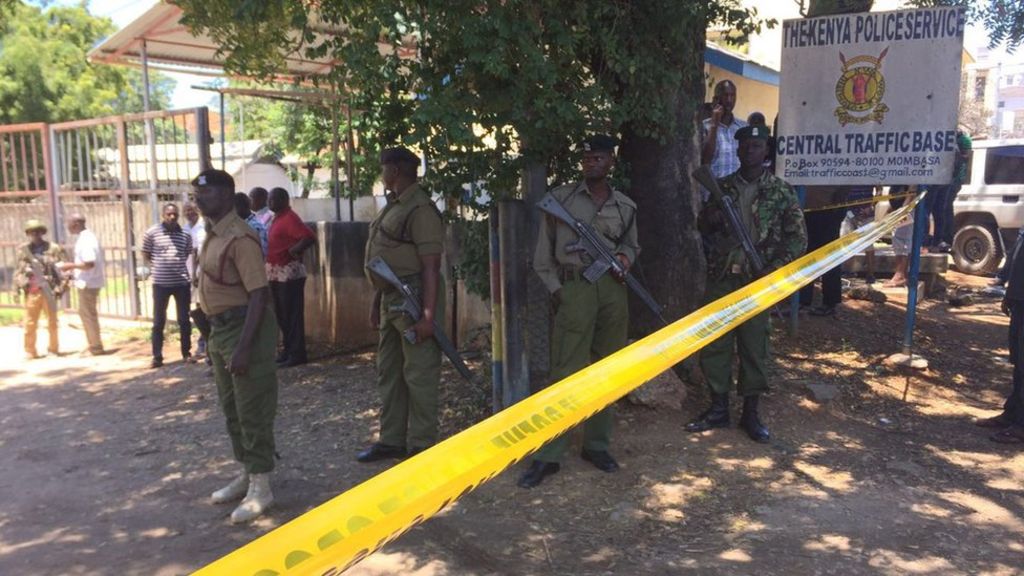 MOMBASA (HAN) September 15.2016. Public Diplomacy & Regional Security News. By Joseph Akwiri. Three women who were killed when they attacked a Kenyan police station last week had pledged allegiance to Islamic State, according to a handwritten note police believe they penned before the assault, an officer said on Thursday.

Kenya has faced a spate of Islamist militant attacks in recent years, usually claimed by the Somali group al Shabaab, but Sunday’s assault on a police station in the port city of Mombasa by the three women was claimed by Islamic State.

Experts say those accused of links to the group, but who live a long way from Islamic State’s heartland, may only be sympathisers rather than have the group’s active backing.

“We pledged allegiance to the caliph of the Muslims, the Amir of the Believers, Abu Bakr al Baghdadi,” according to the handwritten shown to Reuters by an officer, who asked not to be named as he was not authorised to speak publicly about the ongoing investigation.

In the note, written on the lined page of an exercise book, the women called themselves Umm Maysarah, Umm Ma’bad and Umm Sa’ad, which the officers said was believed to be their aliases. The officer said the note was found in the house they stayed in.

“Know that Islamic State soldiers are everywhere,” the note said. “O filthy Kenyan government, don’t think we’ve forgotten how you mercilessly killed our brothers … We promise to make your women widows and your children orphans.”

Amaq news agency, affiliated to Islamic State, said on Tuesday that “supporters” of Islamic State carried out the Mombasa attack, in which the three women, with their weapons concealed under flowing robes worn by some Muslims, tricked their way into the police station, stabbed an officer and threw a petrol bomb. Police also found an unexploded suicide vest.

This appeared to be the first claim of an attack by Islamic State in Kenya, although police said in May they had detained people linked to Islamic State.

Kenya’s authorities have been cracking down on people they accuse of promoting militant ideas or planning and carrying out attacks, particularly in the coastal region where many Kenyans live in the majority Christian African nation.

Muslim activists and rights groups have accused the government of heavy-handed tactics and say extra-judicial killings have spurred on radicals. The government denies any such killings and says it is simply fighting terrorism.

Saagar’s husband, Sheikh Aboud Rogo, was a fiery preacher who was killed by unknown gunmen in 2012. Supporters said police executed him, which officials denied.

Al Shabaab has said it targets Kenya for sending its troops into Somalia as part of an African force to battle the Islamist insurgents. It often says it will continue attacks until the Kenyan “crusaders” leave. (Writing by Elias Biryabarema; Editing by Edmund Blair and Raissa Kasolowsky)