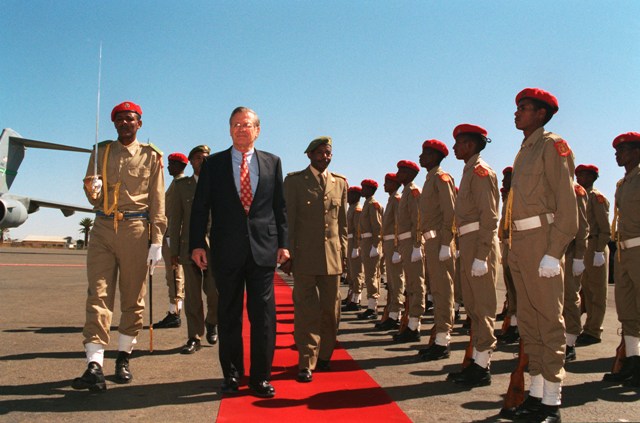 Djibouti (HAN) April 6, 2014 – Eritrean Gedab News learned that several companies of the Eritrean army are being hallowed at alarming rates. Due to serious desertion of conscripts, many squads ceased to exist and platoons have been downgraded to the level of squads. At the same time, the size of companies has decreased to that of a platoon, in some instances to a lesser size.

Meanwhile, the weekly and bi-weekly drill the peoples’ militia was supposed to go through has almost stopped. Farmers and herders have gradually stopped attending the compulsory weekly or bi-weekly drills that were a common sight around the countryside until last year. Recently, the militia army has all but disappeared from the scene.

Citizens have just stashed the arms that were supplied to them by the regime and are going about their work tending to their farms and herds. In cities and towns, some militia personnel are still required to do night guard duties.

Until last year, the standing militia army numbered approximately 150,000 people who were assigned to different policing and guarding tasks.

The life of the weakest sector of the society, farmers and herders, has become abysmal while those who do menial labor and engage in petty jobs to survive have been thrown into destitution. At the same time,life has continued to be difficult for Eritreans due to taxation and other moving regiments imposed by the government, on top of the widespread corruption, mainly bribery which has become rampant.

The army is in a crisis. It has also been plagued by desertion to the extent that members of the army, mostly conscripts, have returned to their units after a leave or after an assignment, only to find that their units have disintegrated. They are usually told to return home and wait for further instruction.

Many conscripts, including junior officers, have disappeared inside the country or escaped across the border to Sudan and, to a lesser extent, to Ethiopia.

For the last six-months, the army has been in disarray after President Isaias Afwerki announced his intentions to restructure the Eritrean defense forces.

Developments in the army have become the main news that people are talking about in Eritrea. Particularly after the posthumous promotion to army chief of staff of Major General Andemariam “Wuchu” who died several weeks ago.

Major General Wuchu was being receiving medical treatment in Eritrea and Sudan before traveling to Italy where he stayed for a considerable time. Giving up on his recovery from his serious illness, Italian doctors decided to send him home to face his fate. He returned to Asmara on a chartered plane accompanied by an Italian doctor who immediately returned home after escorting General Wuchu who arrived on a wheelchair. Eyewitnesses who saw him at the airport said he looked haggard, tired and had several glucose and other intravenous lines connected to his body. He died a few weeks later.
Eritreans discovered General Wuchu’s promotion to the position of the army’s chief of staff when his bio was read at his funeral. The Eritrean regime doesn’t inform the people even about major changes in the government.

Nearly a week following the death of General Wuchu, Eritreans came to know that Major General Philipos Weldeyohannes was promoted to the rank of full general and appointed chief of staff of the Eritrean army. The Eritrean army never had lieutenant generals or major generals directly become full generals.

In all state funerals, General Sebhat Ephrem, the defense minister, used to lay the wreath on behalf of the Eritrean armed forces, but at the state funeral held for the three veterans who died two weeks ago (Brigadier General Amanuel Haile (aka “Hanjema”), Brigadier General Mebrahtu Tekleab (aka “Vaynak”), and Mr. Desu Tesfatsion,) it was General Philipos who laid the wreath on behalf of the armed forces.

In a related story, a few junior officers of the Eritrean army have been promoted to the rank of Brigadier General, Colonel and Lieutenant Colonel. At the same time, at least three senior generals have been assigned to civilian positions by the president of Eritrea.

According to our sources, at least two of them have refused to accept the assignment. It is expected those who refused to take off their military suits will be frozen with no roles to play either in the army or the public sector.

So far, after the two generals refused to accept the assignment, the position of governorship of the central region remains vacant. As usual, when it is filled, Eritreans will know through the grapevines since the government doesn’t provide timely information on such appointments and promotions.

(In Picture) – Rumsfeld was  in Asmara, Eritrea, to meet with leaders concerning defense issues of mutual interest; some of the Generals that reassigned to a civilian positions.
–
Speaking Freely is an Geeska Afrika Online and Horn of Africa Newsline (HAN) feature that allows guest writers to have their say. if you are interested in contributing or sending News, Views and Comments. Please email at: han@geeskaafrika.com