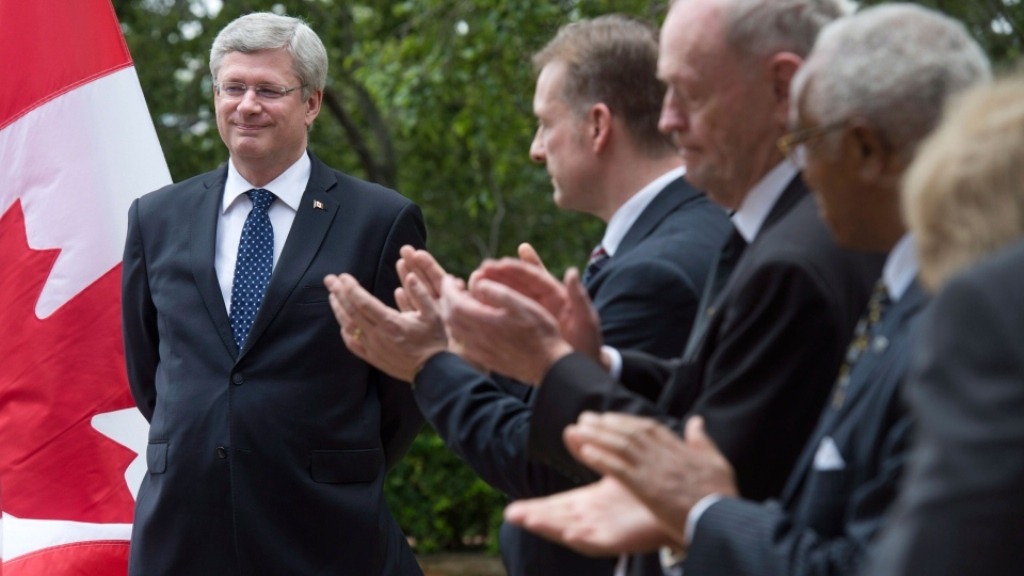 Addis Ababa  (HAN) June 20, 2014 – Sharing the Debate with Afro-Canadian Diaspora in Africa and the World through the Geeska Afrika Online Magazine. Let us hope that it will bring together all those who see the mutual interests of African states and Canada and who seek to build strong and lasting partnerships based on those interests.

Photo: For their final respects to Nelson Mandela, including Prime Minister Stephen Harper and an entourage of Canadian dignitaries.

Prime Minister Stephen Harper announced last year new scholarships in Mandela’s memory to benefit both Canadian and African students. “Nelson Mandela believed that education is the foundation of democracy,” Harper. “He told us that nation-building and prosperity depend on the education of our future leaders.”

Read the debate with prospective of Africa’s New Reality and then decide which one of the debaters you would side with. See how your choice compares to other readers.

According to David Hornsby’s recent article, “Turning Perceptions into Reality: Canada in Africa”

This argument is espoused by some of the contributors to CIGI’s 2013 Canada Among Nations project, “Canada-Africa Relations-Looking Back, Looking Ahead”.

This stands in stark contrast to other recent articles on Canada-Africa issues. A cursory look at the articles on OpenCanada reveals that African issues receive few to no comments, Facebook likes, tweets, or Google recommendations.

Is this a result of debate fatigue? A defeatist mentality? Or just a general lack of interest in the Canada-Africa relationship? Should we be concerned that this is the state of affairs some 50 years on from Canada’s first efforts to engage the African continent in a focused way?

In fact, knowledgeable observers of the Canada-Africa relationship would agree that the continent has never been the priority of any Canadian government from Lester B. Pearson to Stephen Harper.

According to the view of Afro-canadians, ”Canada must adapt its policies to reflect the changing fortunes of African states.”
Some say the current canadian government’s foreign policy is insignificant – all sound and fury. Others say it is a new, well-defined approach to the world built on solid principles of conservatism.

“The Harper government’s performance in international affairs has shown more interest in the podium than the playing field.” So writes Joe Clark, the former Progressive Conservative prime minister and foreign minister, in his recently-published book How We Lead: Canada in a Century of Change. Mr. Clark contrasts the old, trusted Canadian foreign policy – we were “trusted as reliable, respected and responsible partner, and building concentric circles of influence on issues from defence to development to conciliation to trade” – with the new, more confrontational “megaphone diplomacy” approach of the Harper Conservatives, who closed the embassy in Iran, shunned the Beijing Olympics, sided unquestioningly with Israel’s most controversial decisions and loudly opposed Palestinian statehood. Is Mr. Clark right – is the Harper government’s foreign policy all sound and fury, signifying nothing? Or is it a new, well-defined approach to the world built on solid principles of conservatism? Two experts on Canadian policy  and foreign affairs, John Ibbitson and Andrew Reddie, are facing off over this question.

Read their assessments below from the right and the left, and vote; either comments or likes Facebook.

From the Left: Andrew ReddieAndrew Reddie is a Toronto-based international-affairs analyst and doctoral student at UC Berkeley.- View Bio
The Harper foreign policy is grounded in a narrow conception of self-interest and hurts Canada’s standing in the world

From the Right: John IbbitsonJohn Ibbitson is an award-winning writer and a senior fellow at the Centre for International Governance Innovation.
Harper’s is an explicitly conservative foreign policy which may not be popular but is consistent and coherent.

PLEASE  PUBLISH YOUR COMMENTS  ON THE DEBATE