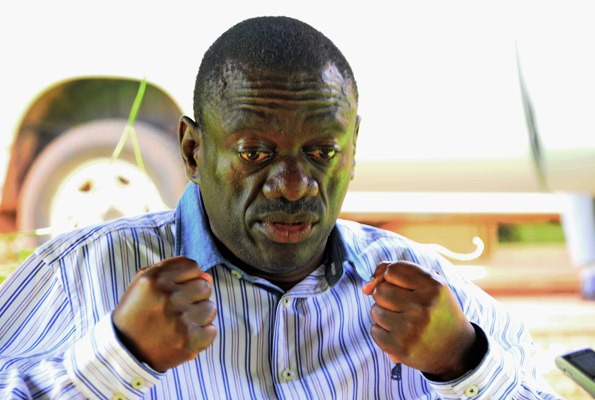 Armed police surrounded Besigye’s house in Kasangati, about 16 kilometers from the capital Kampala ahead of a planned rally by his Forum for Democratic Change (FDC).Museveni’s government is panicking and that is why they have stopped us from leaving our homes FDC spokesperson Semujju Nganda was also prevented from leaving his Kireka home. Besigye told journalists that he was being prevented from meeting his supporters in the eastern part of the country. “They are violating my human rights. I do not see any reason why they are stopping me from going wherever I want,” he said. FDC said it had the police about their activities scheduled for Thursday as required by law.

Nganda said the government was trying to curtail their campaigns ahead of crucial elections next year. “Museveni’s government is panicking and that is why they have stopped us from leaving our homes,” Nganda said.  “When I woke up in the morning I realised that my home had been surrounded by policemen.” Semujju said they had planned to open a number of party offices before addressing a rally. However, police spokesperson Kale Kayihura said the rallies were illegal. Kayihuru said FDC informed police about the rally but failed to fulfil certain conditions.  Museveni, in power for the past 27 years, would seek reelection next year. theafricareport