Edris forced the pace, clocking a split of 2:41 for the fourth lap to pull away from Soi, Longosiwa and Mutai. Edris unleashed a sprint to win the half-way mark bonus and then produced his surge during the seventh lap when he opened up a 20-second gap over Longosiwa and Soi.

With one lap to go, Edris increas 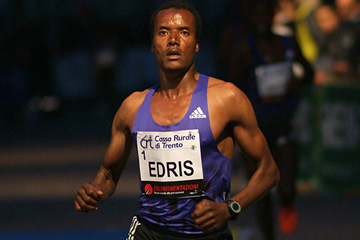 ed his gap to 25 seconds and went on to cross the finish line unchallenged in 28:46.

Behind the Ethiopian, five-time Giro al Sas winner Soi launched his kick to prevail by four seconds over Longosiwa to take second place in 29:11. Mutai finished fourth in 29:42.

Three weeks before he lines up for the New York Marathon, 2012 European cross-country champion Andrea Lalli repeated his fifth-place finish from last year.

“It was a good race for me,” said Edris. “It’s special to win for the second consecutive year in Trento. Unfortunately I was not very happy with my track season and my race at the World Championships in Beijing where I finished 10th in the 10,000m.”

The event, previously known as the Giro di Trento, returned to its original name Giro al Sas, which derives from the fact that the course features 10 one-kilometre loops on the main city streets which are locally referred to as ‘Al Sas’.

The Giro al Sas was the highlight of a long weekend of running events within the Trentino Running Festival which also featured the Trento Half Marathon.

Diego Sampaolo for the IAAF