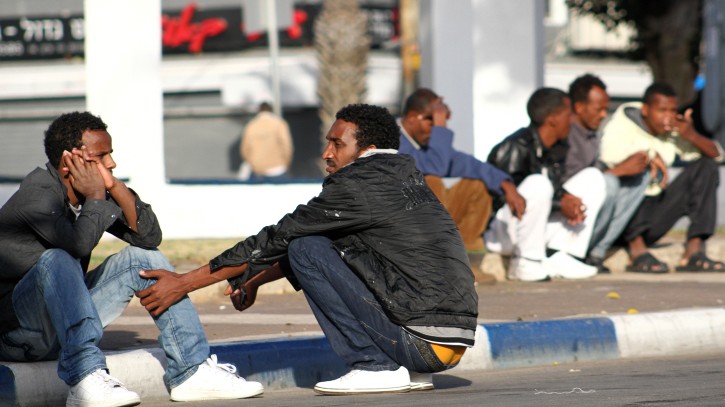 Tel Aviv  (HAN) May 9 .2016. Public Diplomacy & Regional Security News.Violence broke out as thousands of illegal immigrants from Eritrean gathered on Friday at the Tel Aviv Convention Center to celebrate 25 years since their country gained independence.

The event, which was organized by the Eritrean embassy in Israel, drew supporters of the Eritrean government, while opponents of the current regime protested outside. Witnesses say brawls between pro- and anti-government Eritreans broke out near the entrance of the Convention Center.

Yonatan Jakubowicz, a senior official at the Israeli Immigration Policy Center, said the event highlights the close ties most Eritreans maintain with their home country, and dispels claims that they are asylum seekers who fled to Israel out of concerns for their safety. Jakubowicz noted that most Eritrean citizens living in Israel even paid a 2% income tax to the Eritrean government, in return for certain services.

“It’s time to end this bluff once and for all that the illegal immigrants from Eritrea are asylum seekers. The overwhelming majority of them are migrant workers who keep close ties with their families and native country, and even participate actively by the thousands in events organized by their home country’s embassy,” said Jakubowicz.

Tens of thousands of immigrants from Eritrea have infiltrated Israel over the past decade. While some have been returned to their home country, the majority have stayed, claiming that they are refugees seeking asylum and that their lives would be at risk if they returned home.

While some on the Israeli left have called for the normalization of most of these illegal immigrants, many on the right have argued that the overwhelming majority of asylum seekers are in fact migrant workers looking to benefit from higher wages and Israel’s generous welfare system.