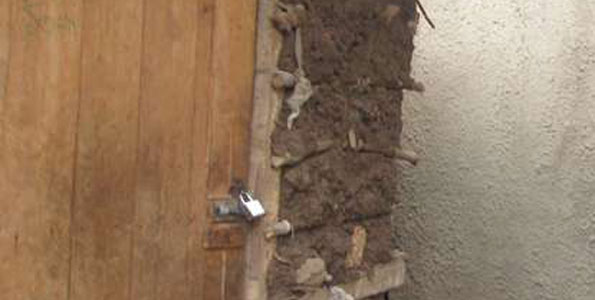 KIGALI (HAN) December 13, 2015 – Public Diplomacy and Regional Stability Initiatives News. Gasabo district officials have been accused of neglecting victims of heavy rains that have left 13 families homeless for over three years now. The residents of Kamutwa Cell, Kacyiru Sector and Gasabo District who live in flood prone zones have tried in vain to be relocated by authorities.

For the past three years, the affected families have been either sleeping in the cold or hosted by their neighbours after their mud houses were washed away by heavy rains. In 2013, when disaster struck, Gasabo district officials promised to relocate the victims to safer places but this is yet to happen. According to Hategekimana Elianne, the victims are now running out of patience.

“We are staying in a high risk zones more so in grass-thatched houses, which cannot withstand floods,” said Mrs Elianne. “We are pleading with the government to act on our case not just empty promises,” she added. Hirwa Jean Baptiste, said when his house was washed away by floods, he was given a three-month rent while waiting for compensation but untill now no action has been taken. Mr Baptiste’s petition was delivered to local authorities, district authorities, parliament and Office of Ombudsman but no action has been taken.

“I have seen nobody coming to me for assistance,” said Nyirasafari Delphine, the Gasabo disaster management officer, adding that not everyone who was affected by disasters is entitled to a house. Parliament summoned Bernadette Kanzayire, Deputy Ombudsman in charge of preventing and fighting injustice, to explain the situation of the residents and plans to ensure their safety.

Mr Kanzayire admitted that there have been no efforts to provide a permanent solution to the problem. However, the Ministry of Disaster Preparedness said that “they were waiting for the request from the district for the to intervene.” Source: theeastafrican