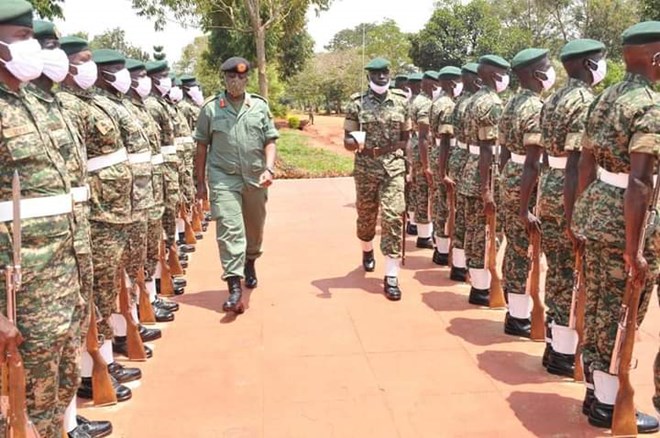 NAKASEKE —The Uganda Peoples’ Defence Forces (UPDF) has resumed its deployment to the African Union Mission in Somalia (AMISOM) after four months’ suspension of the rotation of troops since the outbreak of COVID-19.

The African Union (AU) and UPDF had suspended troop movements in and out of the mission area as force protection measure and one of the mitigating measures in combating the spread of the pandemic.

The Chief of Defence Forces (CDF) of the UPDF, Gen David Muhoozi said that AMISOM and UPDF has built capacity to contain the spread of the pandemic.“COVID-19 came as a new phenomenon. We neither had no concrete ideas about the virus nor did we have adequate capacity to manage it,” Gen Muhoozi.

He noted that the entire world is affected and hence even with the money at hand, it was difficult to access the logistics to handle the pandemic. The CDF added that many countries have now developed capacity to produce the necessary logistics to address the problem such as sanitizers and personal protective equipment.

The Battle Group Commanded by Col Jimmy Musoke comprises of over 1,800 personnel, both veterans and regular force who were mobilized in June 2019 and regular Forces.

The CDF counseled the soldiers to be cautious of their health by observing the COVID-19 guidelines and preventive measures of all other diseases. He also told them to remain alert all the time to thwart enemy threats and consolidate the achievements of the previous battle groups.
He expressed confidence that the extra training time the battlegroup received will make them perform batter.

The CDF was accompanied by the Commander Land Forces, Lt Gen Peter Elwelu. Lt Gen Elwelu urged the deploying troops to ensure maximum discipline, which is a core attribute in military service.

Commandant of PSO-TC, Brig Gen Bonny Wolimbwa, said the Battle Group is a hardened one because most of the members had earlier served in Somalia when the situation was more volatile and they had actively participated in the liberation struggle of places such as Mogadishu city, University, Masilah, Balcad, Jowhar, Afgooye, Bur-Hakaba, Marka and Barawe.

Uganda deployed to Somalia in 2007 and since then it has fielded in 30 regular battle groups plus three other special battle groups; Battle Groups 9+, 11+ and 13+.