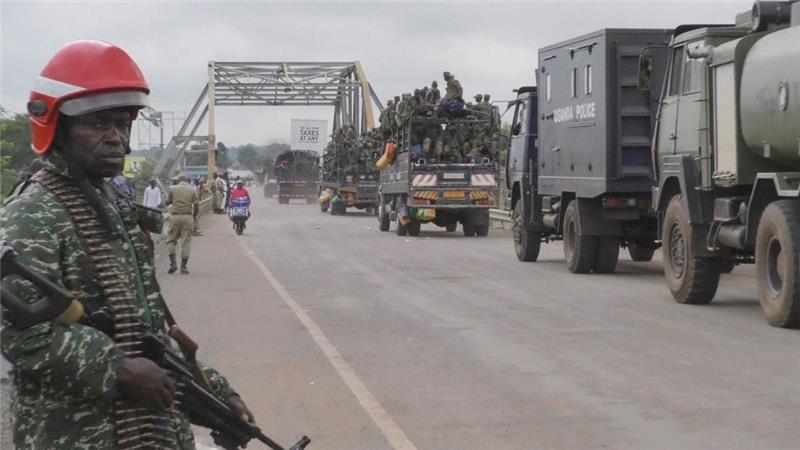 KAMPALA (HAN) July 15.2016. Public Diplomacy & Regional Security News. By DENISS DUMO. Uganda’s army began evacuating citizens from inside neighbouring South Sudan on Thursday where fighting between forces loyal to the president and his rival has plunged the nation into its worst crisis since the end of a two-year civil war.

After the civil war erupted in 2013, Uganda’s forces also crossed into South Sudan to assist with evacuations, but in that case they also stayed on to help President Salva Kiir secure the capital Juba. At the time this raised worries about the conflict widening but the forces withdrew late last year.

This time, Uganda said its troops, who witnesses said entered South Sudan in trucks and armoured vehicles, would stay in a town outside Juba and focus on evacuations.

But a Ugandan official said a fresh flare-up could mean a longer stay, without giving a timeline.

Juba has been calm since Monday evening, when Kiir and Riek Machar – the former rebel leader and now vice president – ordered their forces to cease hostilities. But residents remain tense and many foreigners have been leaving.

“It’s a short-term mission but it can be complicated by new developments,” Uganda’s government spokesman Ofwono Opondo told Reuters, adding that “you can expect us to stay” if fighting flared again and more people wanted to leave.

The regional African grouping IGAD has called for the U.N. mission UNMISS to be given a stronger mandate to enforce peace in South Sudan and called for extra troops to keep order.

The United Nations said it was ready to work with IGAD on the proposals after thousands of civilians in Juba fled to U.N. bases in the capital to seek refuge.

Kiir said there was no need to add to the 12,000-strong UNMISS force. “UNMISS here has so many foreign troops, so we will not accept even a single soldier here,” he told a news briefing.

Many foreigners have been evacuated from South Sudan, the world’s newest nation which is still recovering from the civil war which killed thousands of people and drove more than 2.5 million from their homes.

Some shops opened up on Thursday and more people were on the streets. The airport has reopened and Kenya Airways resumed scheduled flights on Thursday.

“We all hope the ceasefire will hold … But at the moment the situation is very unstable,” deputy German ambassador to Uganda, Petra Kochendoerfer, said in Uganda’s capita Kampala late on Wednesday where evacuated German citizens were arriving.

Washington said on Wednesday it had deployed 47 troops to South Sudan to protect U.S. citizens and the embassy in Juba.

Kiir and Machar have long been political and military rivals. Kiir’s decision to sack Machar in 2013 led to the civil war erupting a few months later. They signed a peace deal in August 2015 and then argued over details amid sporadic fighting.

Machar finally returned to Juba and resumed old post as vice president in April. But other moves outlined in the peace deal, such as integrating their forces, have stalled.