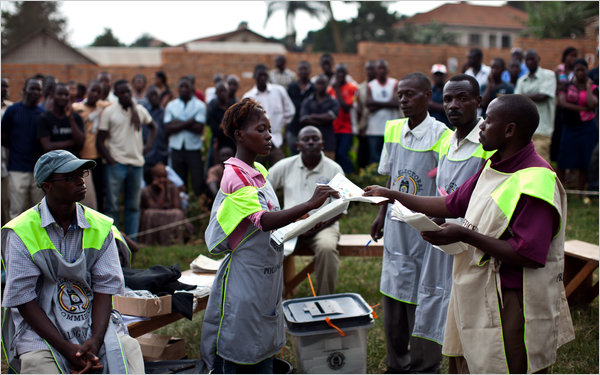 KAMPALA February 22, 2016 – Public Diplomacy and Regional Stability Initiatives News. By: By L. Muthoni Wanyeki. One lesson from the Ugandan elections is that the tilting of the playing field in favour of the incumbent begins long before polling day. Any assessment of whether, in fact, an elector

al contest was indeed “free and fair” must therefore start right at the beginning.

Which is where we are now. There are many “beginnings,” but let’s focus here on the beginning for the players. Not the contestants — which is where the analogy to a game falls apart. But us, the electorate, whom the analogy reduces to the role of fans and spectators. And our beginning has to do with the just-commenced voter registration exercise.

An argument has just begun over the distribution of biometric voter registration kits relative to the targets set for new voters to be registered by the Independent Electoral and Boundaries Commission. The Coalition for Reform and Democracy has challenged those targets themselves — raising the bar to the total number of those with IDs but not yet registered. Which is as it should be.

At the other end of the scale, the IEBC’s target is highest in the Rift Valley — at about 842,000 new voters. Yet the coverage of BVR kits across voter registration centres in the Rift Valley is sixth out of eight — at 22 per cent.

The dissonances may seem small. And the Rift Valley is, of course, also an incumbent stronghold that seems to have been similarly disadvantaged. That said, it is important to recall that last time round, the Jubilants’ argument was that their party just ran a slicker campaign and got more of its supporters out to register.

That argument was undermined by evidence presented by civil society — but not considered by the Supreme Court in its framing of issues to be determined — that showed clear patterns of changes in voters registered between the closing of voter registration and the last voters’ register shared with political parties two months later.

Changes that seemed innocuous at first glance. But that, when mapped against incumbent and political opposition strongholds, showed clear movements up in the former and clear movements down in the latter.

The point being that any single (dis)advantage may be small. But a series of small (dis)advantages eventually adds up. As the Ugandans know only too well. If the electorate are indeed the players — not the fans and spectators — we should not let this anomaly be reduced to a Jubilant/CORD exchange. We should get out there and register.