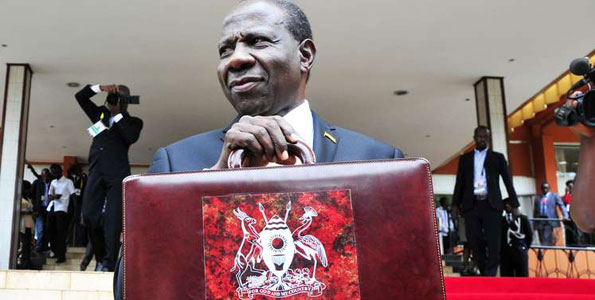 KAMPALA (HAN) June 18.2016. Public Diplomacy & Regional Security News. By DICTA ASIIMWE. Global oil prices may be fluctuation between recovery and further decline but officials in Kampala are looking to the “black gold” as the only possible saviour for an ever growing public debt.

Optimistic projection of robust economic performance have been betrayed by a sluggish economic performance leading to a steady decline in the annual growth rate from a 7 per cent high in 2008/2009 to 4.8 per cent this year, though official estimates still cling to the hope that better performance at an average 5.5 per cent is still possible.

The economy last grew at a rate of 7 per cent in the 2008/09 financial year, yet this target is an important benchmark for the country to be able to pay back the growing public debt and to meet the targets for becoming a middle-income country by 2020.

While reading the 2016/17 budget, Minister of Finance, Planning and Economic Development Matia Kasaija announced that the government had revised the average gross domestic product growth projections downward from 7 per cent to 6.3 per cent for the next three to five years.

According to the National Development Plan (NDP), Uganda needs a GDP growth of above 7 per cent to become a middle income country by 2020 and to afford its heavy investments in public infrastructure.

This was also a target for the first NDP of 2010-2015, but it was never achieved. At the time the second development plan was launched, officials at the National Planning Authority (NPA) said that achieving 7 per cent GDP growth and becoming a middle- income country by 2020 was a tenable target.

After all, public investment in several big electricity dams, an oil pipeline and a standard gauge railway that were to be completed over the five year period of 2015 and 2020 would mean enough money being generated and pumped back into the economy.

But Joseph Muvawala the executive director at NPA is not so sure of his organisation’s predictions anymore. According to him, automatic growth is no longer guaranteed by just a stable inflation rate and general macroeconomic stability.

He says that part of the problem is the international economic slowdown, which has reduced the value of Uganda’s export, while increasing the cost of imports, but adds that the economic base has reached a point where growth is no longer automatic.