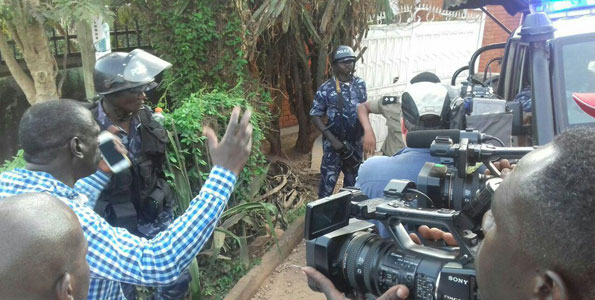 KAMPALA (HAN) February 18, 2016 – Public Diplomacy and Regional Stability Initiatives News. Uganda’s top presidential challenger Kizza Besigye on Thursday evening stormed a house in Naguru, Kampala which he and his Forum for Democratic Change (FDC) party alleged was being “used by the Uganda Police and the military for pre-ticking ballots, manipulating election results, and committing many other electoral offences.”

Besigye went to the house after attending an urgent meeting at his party’s offices shortly after he arrived from his upcountry home in Rukungiri in western Uganda where he had voted.

At the Naguru home, Besigye is said to have knocked at the gate but was not let in. A number of police officers, many of whom seemed to be high-ranking due to the number of pips on their collars, could be seen through the opening at the gate, but they all hastily disappeared into the house without making any attempt to inquire what Dr Besigye wanted.

In a short while, Michael Kasigire, the Kira Road Police station commander, arrived at the scene with a pick up full of policemen.

Andrew Karamagi, a lawyer and an activist told Kasigire that they suspected the house was being used to rig the election and requested him to ask the occupants to allow them in. Kasigire withdrew and made a phone call.

A standoff then ensued until the police decided to force Dr Besigye into one of the patrol vehicles and drove him to his Kasangati home.

In the meantime, the FDC tweeted that Besigye “has been arrested and we do not know where he is,” without giving further details.

Besigye has been repeatedly detained by police in the past, and is commonly released without charge hours later.

On Monday the Uganda police briefly detained Besigye after a standoff over the campaign route to use. He was later driven to his home.