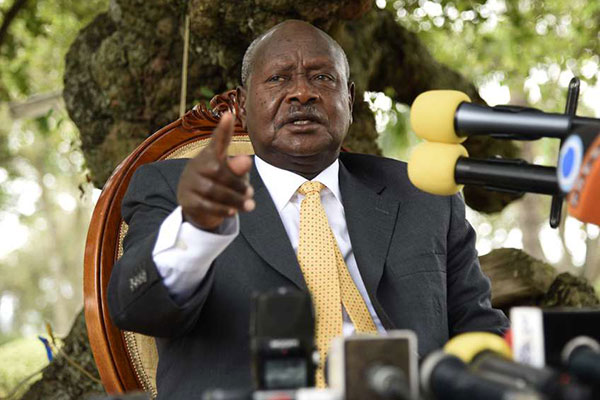 On Friday October 6, President Yoweri Museveni openly backed the ongoing push to amend the Constitution and remove the age limit on the presidency.

He told members of his ruling National Resistance Movement (NRM) caucus that they were either with him or against him on the matter.

President Museveni declared that NRM was for the change of law and that he personally supported the position taken by his Cabinet to back the private member’s Bill sponsored by Igara West MP Raphael Magezi.

NRM MPs opposed to the amendment were immediately shown the door, but outside of the caucus, the lawmakers are meeting a hostile public.

As opposition to the lifting of presidential age limits continues to grow, the ruling NRM finds itself under siege from its own supporters.

Yet its resolve to dig in anyway and even to undercut public mobilisation against scrapping the limit presents further chaos and deadly clashes.

Already, the decision by police to restrict how opposition Members of Parliament should conduct their consultations over the age limit Bill has spawned at least three violent clashes in which police shot dead one person and critically injured several others.

The police order and its resulting consequences have been condemned by the legal fraternity and the opposition as illegal, partisan and dangerous for the country and which must be rescinded without delay.

“We have said before in our rule of law second quarterly report that the age limit debate must be conducted with respect to human rights. Yet what we see clearly police is growing into a unlawful institution as its orders have no basis in law. We see an increase in the disrespect for human rights, which cannot in any way be a good thing for our country,” said Francis Gimara, president of Uganda Law Society.

Police, however, are unlikely to review the orders the same way the opposition is unlikely to back down from joint consultations because the political wind seems well behind their backs.

A number of NRM legislators have so far faced a torrid time trying to convince their constituents of the utility of lifting age limits. While some have been blocked altogether from broaching the subject, even those who have taken a straw poll have met a negative response.

With this in mind, the opposition appears to have decided to ramp up public opposition against the Bill in the hope more of their ruling party colleagues will develop cold feet if for nothing else not to jeopardise their own political fortunes.