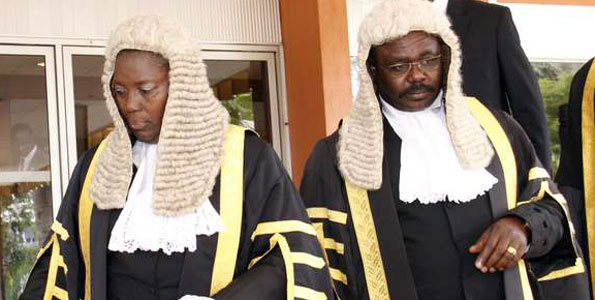 A picture of Uganda’s Parliament Speaker Rebecca Kadaga and her deputy Jacob Oulanya smiling, holding hands and waving at State House, Entebbe, in June was supposed to mark the end of five years of strained work relations in the 9th Parliament and the beginning of a new chapter in the 10th Parliament.

But the feud between Kadaga (Woman MP, Kamuli) and Oulanya (MP, Omoro) went on simmering for months before coming out into the open in late August, leading to the suspension of House business for more than a week.

Interviews with at least half a dozen people familiar with goings-on in parliament revealed that a near total breakdown in communication between the two saw both jetting off to the United States apparently to attend the 28th annual convention of the Uganda North American Association (UNAA) on September 2-4, in Boston.

The EastAfrican has learnt that the absence of harmonised schedules for travel and sharing of responsibility for the House, independent budgets for travel and plans contribute to the unending clashes between the two leaders in the ruling National Resistance Movement party.

“The Speaker went with her own delegation and the deputy Speaker made separate plans and had his own delegation,” said a Member of Parliament who has served in the House for nearly 20 years now.

There is no agreement on exactly how many MPs travelled to Boston, with numbers being touted ranging from as low as 23 to as high as 78.

An official brief “to members of parliament on the delegation to the UNAA convention” seen by The EastAfrican lists 23 MPs. But a Member of Parliament we spoke to reeled off names of colleagues he knew had travelled but were not on the official list when The EastAfrican showed it to him.

In a separate interview, MP Abdul Katuntu of the opposition Forum for Democratic Change (FDC) and chairperson of the Public Accounts Committee (PAC) said anything upwards of 60 MPs could have travelled.

“My committee alone had four MPs travelling, two went officially and the other two just informed me out of courtesy that they would be travelling,” said Mr Katuntu.

But both Helen Kawesa, assistant director public affairs and communication at parliament and Ruth Nankabirwa, the government Chief Whip, insist that it was only a delegation of 23 including members of Cabinet who made the trip.

Without the Speaker and the deputy, House plenary business was suspended though committees were asked to continue working.

Some MPs have complained about the inconvenience the suspension has caused to those who did not travel but Ms Kawesa justified the suspension by insisting it had not caused any paralysis. She instead placed the responsibility at the door of the executive, which is in charge of House business.

An August 31 letter to all MPs from Paul G. Wabwire of the office of the Clerk to Parliament announced the suspension of plenary business quoting a request from the prime minister that indicated a busy schedule for the Cabinet.