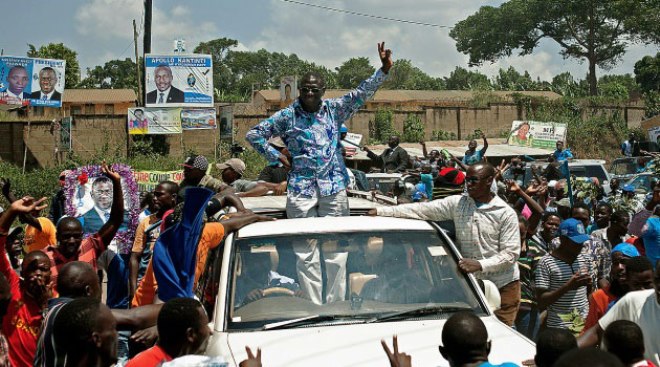 KAMPALA (HAN) April 4. 2016. Public Diplomacy & Regional Security News. Ugandan presidential candidate Kizza Besigye remains under house arrest despite an order to Kasangati police to withdraw security from his home, according to a spokesman for Besigye’s party.

Police surrounded Besigye’s home and erected roadblocks along the route leading to his house shortly after the February 18 general election. Leaders of Besigye’s party, the Forum for Democratic Change (FDC), were initially prevented from visiting him at his home, which they said thwarted their efforts to legally challenge the disputed election. The electoral commission declared incumbent President Yoweri Museveni winner of the presidential vote.

Addressing reporters at police headquarters in Kampala’s Naguru neighborhood, Inspector General Kale Kayihura, who had given the order to pull security from Besigye’s home, nevertheless called on police to watch his movements.

Local media quoted Kayihura as saying, “Withdrawal of our officers from Besigye’s home is an extension of a token of goodwill, but we expect him to respect the law. Dr. Besigye always goes about his business undisturbed. It’s only when we sense that he’s about to cause trouble that we contain him. My hope is that even after we have shown him goodwill, he will not cause problems.”

But the FDC spokesman, Wafula Oguttu, said continued detention of Besigye was illegal and a gross violation of his human and constitutional rights.

“I went to Dr. Besigye’s home and I found many policemen still deployed, and I found three roadblocks on his land,” Oguttu said. “I stayed with Besigye until midnight, and when I came out … there was one closer to his gate, and I was thoroughly checked. …

“The local [police] commander was quoted as saying he had not yet received a formal order from his boss to withdraw his policemen from Dr. Besigye’s compound, land or premises. … This is not the first time the inspector general of police is saying Dr. Besigye is not under house arrest. He has done that several times. What he tells the public is different from what is on the ground.”

The government has often accused Besigye and his FDC supporters of creating tension, defying orders and violently clashing with police. Oguttu said the FDC would continue to defy what he said was the continued unconstitutional violation of the rights of Ugandans.

“Dr. Besigye has not broken any law,” Oguttu said. “For the last 15 years they have been taking him to court, [but] they have not proven any single case against him. They simply detain him. Everything Dr. Besigye does, he does it according to the law.