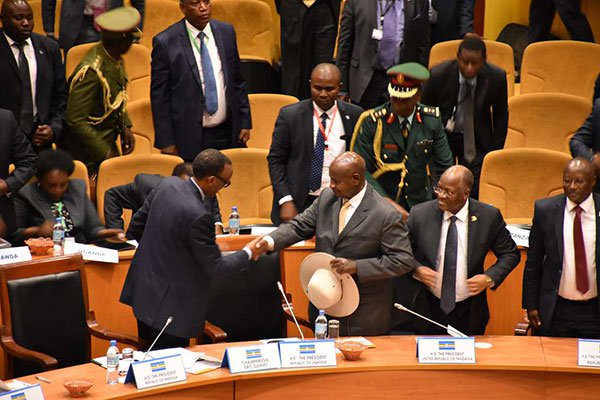 Rwandan President Paul Kagame took over the chair of the East African Community on Friday from his Ugandan counterpart Yoweri Museveni, after a long day of heated consultations compounded by hostile relations between Rwanda and Burundi.

Highly placed sources in the EAC Secretariat told The EastAfrican that Burundi opposed the takeover of the chair by Rwanda, arguing that its neighbour should not assume the chairmanship before a lasting solution to their disputes has been found.

Since late last year, when Burundi scuttled the summit over its unresolved issues, President Pierre Nkurunziza has been pushing the EAC leadership to consider convening an extraordinary summit to address the differences pitting his country and Rwanda. He accused Rwanda of harbouring “ill motives,” but his Rwandan counterpart shifted the blame, saying Bujumbura had repeatedly provoked Kigali.

Relations between the two neighbours have deteriorated over the past three years, with armed attacks resulting in the deaths of civilians and fighters, especially among the border communities.

Speaking after handing over to Kagame, President Museveni warned that the private sector in the region would not grow if the Community failed to solve the high cost of doing business among partner states. He cited the cost of power, which he said the region is working on, high transport costs, labour and finance.

He however noted that the region was dealing with the cost of transport by building modern railways.

“High interest rates should be addressed,” he added.

The outgoing chairman of the EAC Council of Ministers Dr Ali Kivejinja, said non-tariff barriers (NTBs) was also discussed during the closed session of the summit and that some progress was reported.

The East African Business Council (EABC) chair Nick Nesbitt commended the Community for addressing some of the NTBs a few days before the summit, saying it was important for the partner states to think of the region before the national interests if they are to support the private sector.

“It’s a shame that 150 million East Africans have to wear used shoes from abroad while we have capable manufacturers of garments,” he said.

He said that the EAC partner states were reducing the private sector to mere traders instead of manufacturers.

Among the agenda of the summit was the progress report on activities of the council of ministers from February 23, 2018 to January 31, 2019, the report of the Council on the implementation of nine previous decisions of the Summit, including status of ratification of protocols, resolution of longstanding NTBs and a progress report on the adoption of a political confederation as a transitional model of the East African Political Federation.

Other decisions of the summit are review of the East African Development Bank (EDB) charter to align it with the EAC, a roadmap for accelerated integration of South Sudan and verification for the admission of the Somalia into the EAC.

The others were modalities for the promotion of motor vehicle assembly in the region to reduce importation of used vehicles from outside the Community, review of the textile and leather sectors to develop a strong and competitive domestic sector that gives consumers better choice than imported textile and footwear, and the directive to have two deputy secretaries general at the EAC recruited competitively on a rotational basis.

Also high on the summit’s agenda were the statuses of the protocols on the Customs Union and Common Market, the financial status of the community, endorsement of Kenya’s candidature for the non-permanent member of the UN Security Council for the two-year period in 2021-2022.

Others were on the appointment of Judge Sauda Mjasiri of Tanzania to the East African Court of Justice, assent to the EAC Oaths Bills 2018 and Monetary Institute Bill 2018.