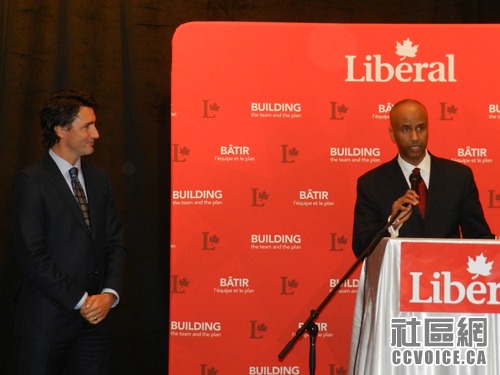 Toronto (HAN) October 27, 2015 – Public Diplomacy and Regional food Security Initiatives News.I love politics. I have been involved in many campaigns, including for Barack Obama’s unlikely presidential bid in 2008 as well as in Ottawa and Toronto over the years. I have actively participated in the Ontario electoral reform referendum of 2007. I know the power of politics and its potential for good. I have always valued the fact, in Canada, we can vote without fear nor a strange knock on our door.How many countries can guarantee that right to their citizens? Not too many. Every time I vote, even when our politics seem to be imperfect and broken at times, I have appreciated the power I have as a Canadian citizen. Politics excites me and keeps me awake at night. In all my efforts in it, nothing has excited me more than the efforts I put in helping elect the new MP from York South-Weston – Ahmed Hussen.Hussen became the first Canadian-Somali to accomplish this milestone.

When I met Hussen on a cold November day last year, in front of City Hall and he asked me to help him win a Liberal nomination, I did not think he had a chance. I was not sure, I wanted to work on a Liberal campaign, since I was not a partisan Liberal and more so because, I felt he had chosen a tough riding to win. He had a stiff competition, including from a former City Councillor. I thought he would be better off in Scarborough, where successful minority candidates seemed to do well.Wearing a lawyers robe, looking tall, elegant, and confident, he convinced me he could win it. I shook his hand and joined his campaign. On nomination day, I was surprised by the many people his team was able to sign up in such a short time frame and bring them out to actually vote. His supporters, were not the usual partisan Liberal cadres, but new immigrants, particularly Canadians with Somali background. In a diverse riding, with large Canadian-Somali population, his campaign used their numbers, as strength to champion their greatest advocate in him.