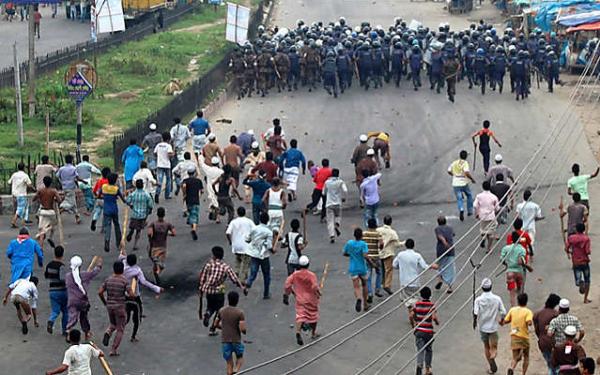 NAIROBI (HAN) June 7.2016. Public Diplomacy & Regional Security News. By Engidu Woldie. BY: Engidu Woldie. This short piece is a reflection and also a rejoinder to the observations made by expert panelists on issues relating to the security situation in Ethiopia at the recent panel discussion held at the Brookings Institute under the theme “the security situation in Ethiopia and how it relates to the broader region.”

The discussion was hosted by the Africa Security Initiative at Brookings and the panelists were Abye Assefa, Associate Professor, St. Lawrence University and Terrence Lyons, Associate Professor, School for Conflict Analysis and Resolution, George Mason University. Michael O’Hanlon, co-director of the Center for 21st Century Security and Intelligence moderated the discussion.

Panelists seem to agree that the federal form of government is working fine in Ethiopia and the country needs a “strong handed” government like the one in power to sustain peace and security. “Personally, for Ethiopia, I would rather have a strong handed government that provide peace than a so called democratic government that is likely to be summoned to the international tribunal,” says Assefa, referring to the leaders of some African countries.

It was puzzling, to say the least, to hear that what Ethiopia needs is a “strong handed” and single party government; deliberately ignoring the fact that what the country actually needs is to form a democratic system of government where all nationalities are to be fairly represented, especially if one is serious about bringing Ethiopia out of its current political quagmire. The status quo is a complete domination by a minority clique representing only about 6% of the population. All aspects of the politics and the economy is tightly controlled by a handful of oligarchs who unashamedly argue that they deserve to be in control of everything as they were the ones who sacrificed the most to topple the preceding military regime.

“From the US point of view, Ethiopia’s stability is seen as a contribution to stability in Africa, something the US supports,” Lyons said at the panel. Assefa is of the belief that Ethiopia’s federal system of government has made the country, and the region in general, peaceful. “The ethnic federal policy that the Ethiopian government has implemented is a very important factor, more so than the government’s ability, in making the country relatively peaceful,” says Assefa.

I don’t know which Ethiopia Lyons and Assefa had in mind when they talked about “peace and stability” but the Ethiopia we have today is engulfed with protest and uprising against the minority rule in all directions of the country. Suffice to mention the ongoing Oromo uprising against deliberate political and economic marginalization by the minority regime; the unrelenting struggle by the people of Wokait and Telemt against a false identity forcefully imposed on them by the Tigayan regime in an apparent move to incorporate vast fertile land into the Tigray region; the demand by the people of Konso in the south for self-administration that led to protest and confrontation with regime’s forces and the arrest of hundreds of people deemed to have dissented against the regime (Some of those arrested had recently broken out of prison) etc. etc. This is the Ethiopia that the panelists tried to portray as “stable and peaceful.”

Lyons actually told the truth few years ago when he assessed the risks to stability in Ethiopia. He wrote in 2011 that “what appears to be a strong authoritarian regime may in fact be fragile and collapse quickly, with considerable potential for violence and uncertainty.” Lyons wrote at length on the multiple potential fracture lines, instability and potential violence due to the narrowing political space and absence of independent press and civil society. At the panel, however, Lyons opted to just say nothing when his co panelist downplayed the role of civil society in promoting a democratic culture in a society.

It is also worth mentioning that the speakers forgot to mention the unbridled and high level corruption that has drained the coffers of the country, leaving the regime unable to sustain and feed its people even for few weeks without the financial assistance form the US and other donor countries. Greed and theft by the powers that be could be one factor of instability and a threat to the security of a nation that’s also plagued by manmade hunger. Would a “strong handed” government stop food riots that could potentially develop into violent protests and ultimately leads to the demise of a regime? The answer is too obvious.

On the issue of land, Assefa echoed Ethiopia’s former Prime Minister, Meles Zenawi’s argument. Assefa said, “I really understand the logic why land should not be privatized because the haves would come and disposes the have nots.”

Meles, asked by the former Assistant Secretary of State for African Affairs, Herman Cohen, as to why he would not allow land to be privatized, replied that if he allow land to be sold to individuals, “the Amharas would buy the land and become dominant again with the land in their possession.”

The current agricultural land tenure system in which the farmer works on a tiny plot of land has clearly failed to make the country self-sufficient in food despite the false claims and public pronouncements by the Prime Minister and others that Ethiopia has achieved food self-sufficiency. Such public statements are not old but made just a year or so ago. On top of this, natural calamity is hitting the country every 10 years resulting in drought. The farmer, even at the best of times, is barely able to feed his family let alone produce surplus for the market.

The Ethiopian military was also one of the issues discussed at the panel. Both panelists agreed that the minority government in Addis Ababa has “a strong military.” But the fact is, about 90% of the generals and other high brass officers in the army hail from one region – Tigray, which only represent 6% of the Ethiopian population. Second, it is a public knowledge that the generals and high ranking officers are involved in high level corruption and are plundering the nation’s resources as they are in competition against each other as to who has the most wealth. They are building multi-million dollar real estates under the names of their family members and other alias. The Ethiopian army, plagued with corruption at the top level, is nowhere near to be called a “strong army”. There has also been an increase in defections from the army as the rank and file is marginalized and alienated by the higher Tigrayan officers who control every aspect of the military. A strong army requires a strong discipline, which the current Ethiopian army is in a serious deficit.

Ethiopia is perhaps the only country that is still dealing with questions of nationalities and over inflated issues of ethnicity with some political actors still harboring cessation from the country as a solution to the conundrums. Corruption at higher level; capital flights in billions of dollars every year; protest and uprising against the minority oligarchic system that controls every aspect of the life of the people; resistance movements by a coalition of armed opposition groups and other vigilante like groups; the growing resentment by the alienated majority of the rank and file in the army; the struggle by the Ethiopian Muslim community to free their religion from government interference; government interference in all religious affairs and institutions; the burden on the lives of ordinary Ethiopians due to the ever skyrocketing prices of staple foods etc. etc. are all too obvious to ignore and are the writing on the wall in the present Ethiopia.

The regime is sustaining its existence with the life support hooked to it by the US and other power players that are after their own geopolitical interest. The simmering discontent by the people is a tinderbox waiting to explode.

The writer can be reached at engiduw@gmail.com