Home Daily Security Briefing The Tana Security Forum: In need of a reboot 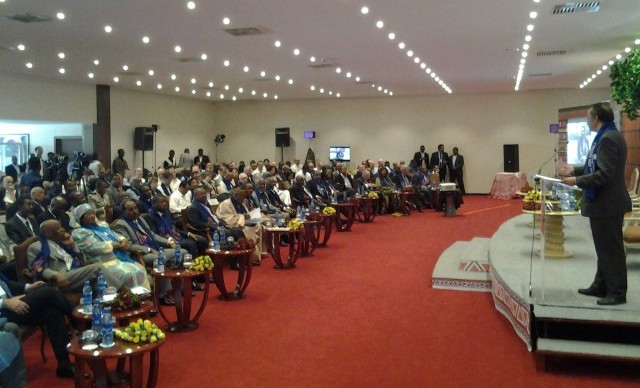 ADDIS ABABA (HAN) April 20, 2016. Public Diplomacy & Regional Security News. One of the few spaces in which an African security agenda could be debated frankly has been damaged, but it can be brought back to life.

Africa needs a high level forum where its leaders can meet with the best thinkers on peace and security issues, and collectively debate how to define and tackle the continent’s challenges. Unfortunately, what has been the best hope for such a forum has degenerated into a parade of dignitaries making vapid speeches.

Five years ago, the late Prime Minister of Ethiopia, Meles Zenawi, inaugurated the first Tana High Level Forum on Security in Africa, which met in Bahir Dar, on the shores of Lake Tana, source of the Blue Nile. He opened the meeting by taking off his tie and instructing everyone else to do the same. There were 60 people in the room, and the next day and a half were devoted to intense, informal and candid discussion.

Most of those present contributed, often several times. Hardly anyone began with the litany, “Excellencies, ladies and gentlemen, let me open my remarks by thanking the organisers etc. etc. etc.”. The formalities were dispensed with in a few minutes and the forum lived up to its expectations. The rationale for holding the forum outside Addis Ababa – to get away from the pressures of the capital to a relaxed, semi-private setting – was vindicated.

The Fifth Tana Forum convened last weekend. It was a complete contrast: dull, repetitive and formal. There were about 200 people there, packed in rows listening to speeches. Almost everyone wore a tie. Protocol and formalities triumphed. The agenda was packed so that no sooner had one panel been rushed to its conclusion than it was time for a ceremony or a break. There were perhaps half a dozen questions from the floor throughout the two days. The high-level participants were whisked away to their suites between sessions and didn’t mingle with the participants.

Tana has become boring. People attend, reluctantly, because they see it as a good networking opportunity. The sessions themselves are dull: most of the time is taken up by entirely predictable speeches.

The support staff worked efficiently and capably and laid on superb logistics – the Forum was beautifully presented – but it was all form and no substance. The Ethiopian Foreign Minister, Tedros Adhanom, rather than guiding the debate, was reduced to timekeeper.

The ostensible theme of the conference was ‘Africa in the Global Security Agenda’, a theme adopted to echo the meeting of the Munich Security Conference core group, which convened in Addis Ababa immediately prior. It is an important topic. But the sessions dodged the controversial issues of the day. How is the chair of African Union Commission to be chosen? What are the tensions between the AU and the United Nations over peacekeeping and how are they to be resolved? Should African peacekeepers become subcontractors in US-French counter-terror operations? How are the conflicts in the Arab world affecting Africa?

How the Tana organisers assess success was summed up in the opening video presentation, which provided three pieces of information about each of the five forums: the number of participants, the number of heads of state present, and the theme addressed. The fact that the quantity was chosen as the measure of success over quality speaks for itself.

Perhaps the most embarrassing moment in the Forum was when honours were bestowed upon Wolfgang Ischinger, CEO of the Munich Security Conference. Ischinger deserved recognition and thanks for many things, but he was not, as heralded, the “inspiration” for Tana. He was obviously rather surprised by this particular accolade, because he was not, as he himself noted, the initiator of Tana. The real origin story for the forum is that Mulugeta Gebrehiwot, founder of the Institute of Peace and Security Studies at Addis Ababa University, first developed the initial concept, then came to Munich for advice, and finally approached Meles Zenawi. The Germans went on to provide Tana with funds – precisely because it was an authentic African initiative and not a copy of something designed elsewhere.

The obsequiousness of this ceremony made everyone cringe – especially the Germans present.

The spirit of Tana five years ago flickered only in the margins, but now a wonderful idea has been turned into a vapid pageant. One of the few spaces in which an African security agenda could frankly be debated has been damaged.

The Ethiopian Prime Minister Hailemariam Desalegn announced in the closing ceremony that the Forum would become the Tana Foundation. That is an important commitment and it provides a great opportunity. The new Tana Foundation can realise the original vision of the Forum, but only by a complete reboot.

Alex de Waal is the Director of the World Peace Foundation.