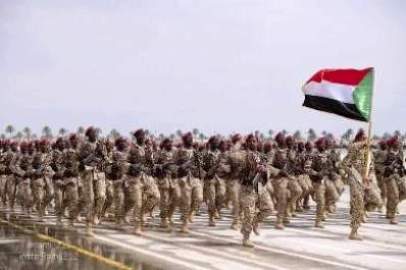 Over 150,000 troops 20 countries including Saudi Arabia, Gulf countries, Bangladesh, Chad, Jordan, Egypt Morocco, Pakistan, Sudan and other Arab and Islamic nations participated in the Northern Thunder drills which run between February.14 and March 10.

The manoeuvres are held against the backdrop of growing Iran’s influence and the expectation of an international military campaign on the positions of the Islamic State (ISIS) group in Syria.

In statements to Sudan Tribune on Saturday, the spokesperson of SAF troops participating in the Northern Thunder, Major Hassan Ibrahim Mohamed, said the exercise was fruitful and beneficial for the Sudanese troops.

“We carried with us our practical experience which benefited much the brothers in the States participating in the exercise,” he said.

“We succeeded in reflecting the bright side of the Sudanese army and this appeared in the multiple praises the troops got from the highest levels,” Ibrahim further added.

The spokesperson was alluding to the experience of the Sudanese army in the counter-insurgency operations which its different armies have being carrying since the independence of the east African nation against rebel groups in southern, eastern and western Sudan.

Regular armies in such law-intensity operations resort to a combination of means, including political, economic, informational, and military instruments.

He said the exercises provided the opportunity for the Sudanese forces to deal with an arsenal of advanced weapons from the East and the West,” adding it was also a learning experience for SAF soldiers who received high-quality military training.

The purpose of the manoeuvres which took place in Hafar Al-Batin area near the Iraqi border is to send a clear message that Saudi Arabia and its allies “stand united in confronting all challenges and preserving peace and stability in the region,” said the official Saudi Press Agency (SPA) .

The 12-day exercise focused on how to deal with irregular forces and terrorist groups and to carry out low-intensity operations.

Sudanese President Bashir attended the concluding ceremony of “North Thunder” last Thursday along with 20 heads of state and government.

Bashir was the only head of state to attend the event wearing military fatigues.