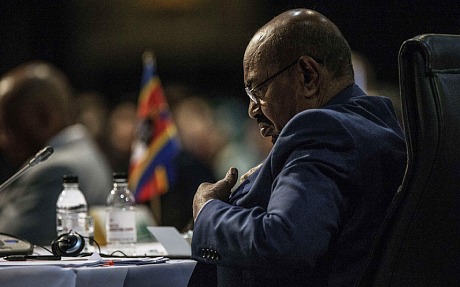 Addis Ababa (HAN) October 14, 2015 – Public Diplomacy Regional Security News. By: Magdi el Gizouli September was a busy month in the chronicle of Sudan’s war and peace bargains. President Omar al-Bashir, wishing to catch a bigger bait than his rather undemanding partners in the government-led national dialogue, offered insurgents in South Kordofan, the Blue Nile and Darfur a two-month ceasefire and blanket pardon to enable willing leaders to join the National Dialogue conference scheduled to begin on 10 October.

Khartoum calculates that it can price up political accommodation with armed groups to normalisation of relations with Washington. But is the US interested?

Armed movements allied in the Sudan Revolutionary Front (SRF) made a more generous offer back – a six-month ceasefire – on the condition that the government participate in a pre-dialogue meeting under the auspices of the African Union (AU) in Addis Ababa. The announcement was made a day after leaders of the SRF held talks with Western envoys to Sudan led by Donald Booth, the US envoy to Sudan and South Sudan, in Paris.

The promises of ceasefire have remained just that – promises – intended as they are to engage a foreign diplomatic audience in a game of bids. But they nevertheless indicate a readiness for compromise in a situation where the warring parties are as bad at making peace as they are at waging war.

A maximalist military solution to the current armed conflicts was never a realistic option for any of the actors, not even the Sudan Armed Forces (SAF). Rather, military operations are by design means to rally, bind or capture the civilian population in the war zones. The government developed over years of counterinsurgency experience a technology of terror to drain the proverbial civilian water out of insurgency zones, an approach that managed wars but never won them.

The ‘liberation’ movements, tragically enough, restricted their investment in civilian support, even within their core ethnic areas, to the marketing of humanitarian disaster, whereby international horror at the human costs of war counts more than the deliverables of liberation.

Obscenely, a low grade conflict with occasional peaks of violence in response to political rather than military contingencies serves the purposes of the warring parties perfectly, pending a favourable balance of forces on the negotiation table. This probably partially explains why over time the determining factor in the calculus of war and peace has become the stance of mediators and, in the background, world powers operating though expert envoys, while domestic politics has regressed to exercises in the drafting of declarations, and even these usually in foreign capitals.

The political event in this case is the travel of politicians and the security harassment they face as they come and leave. While this situation leaves little to admire, it is a mode of politics and deserves investigation as such.

Abd al-Khalig Mahjoub, the late Communist Party leader, explained his discovery of Marxism as a praxis resource for national liberation with reference to the futility of the politics pursued by the mainstream nationalist movement dominated by the clerks of the colonial administration. Mahjoub experienced the petty manoeuvring of the early nationalists first-hand as a student in Cairo where it largely took place.

At the time, newspapers in Khartoum reported the travels of delegations to Cairo and London as the political events of the day quite like today they report Ghazi al-Attabani’s trips to Addis Ababa or Sadiq al-Mahdi’s busy itinerary. Yasir Arman would likely imagine himself a Sudanese Oliver Tambo but is closer, judging by Mahjoub’s yardstick, to the likes of the pro-Egypt al-Dirdiry Ahmed Ismail, Ismail al-Azhari’s minor partner in the Nationalist Unionist Party of the early 1950’s, than he might favour.

Yasir entered the meeting with the US envoy to Sudan and South Sudan, Donald Booth, in Paris on 10 September declaring that the SRF’s bonds with Sadiq al-Mahdi, chairman of the National Umma Party (NUP), are strategic and cannot be severed. He walked out on 14 September with the SRF’s new ‘roadmap’ effectively putting the alliance with Sadiq al-Mahdi, not to mention the opposition National Consensus Forces (NCF), to rest – if the government would only accept.

The government in Khartoum, drawing on long experience, avoided a direct rejection of the AU Peace and Security Council’s call for a pre-dialogue meeting in Addis Ababa by declaring readiness to meet the armed movements but not their political allies, i.e. the NUP and the NCF, provided that discussions are restricted to guarantees for participation of the SRF leaders in its homegrown national dialogue process.

Al-Rasheed Haroun, a state minister at the presidency, said it all a few days ago when he urged leaders of the armed movements to reconsider their position in light of the changing diplomatic environment around them. Haroun was referring to the apparent breakthrough in relations between Sudan and Uganda after President Museveni’s summit meeting with President al-Bashir in the Sudanese capital and the slow and steady improvement in Sudanese-US relations.

In Paris, Booth reportedly pushed the SRF leaders to accept Bashir’s offer of a ceasefire and outline some sort of plan of how they would like to see the conflicts in the country ending. The SRF’s new roadmap is their homework after the meeting, a reluctantmujamala (courtesy) intended to score diplomatic points that parallels the government’smujamala series to Thabo Mbeki and his African Union High Level Implementation Panel, the German foreign ministry delegations collecting mileage back and forth between Khartoum and Berlin, and of course Donald Booth himself who was recently welcomed in Khartoum after a long Sudanese sulk.

As things stand, the government calculates that it can price up political accommodation with the armed movements to a level that matches the Cuban if not the Iranian precedent – namely the lifting of US sanctions, debt relief and normalisation of relations with Washington. The SRF leaders on the other hand are in no position to reject serious US pressure if and when it comes, but are keen in the interim to influence any potential bargain while they still can.

Alas, the US, where all the hearts lie, is not that interested. Abd al-Khalig, had he been with us, would have shelved the whole bunch under the category ‘neocolonial agents’, give or take a few petit bourgeois reactionaries.